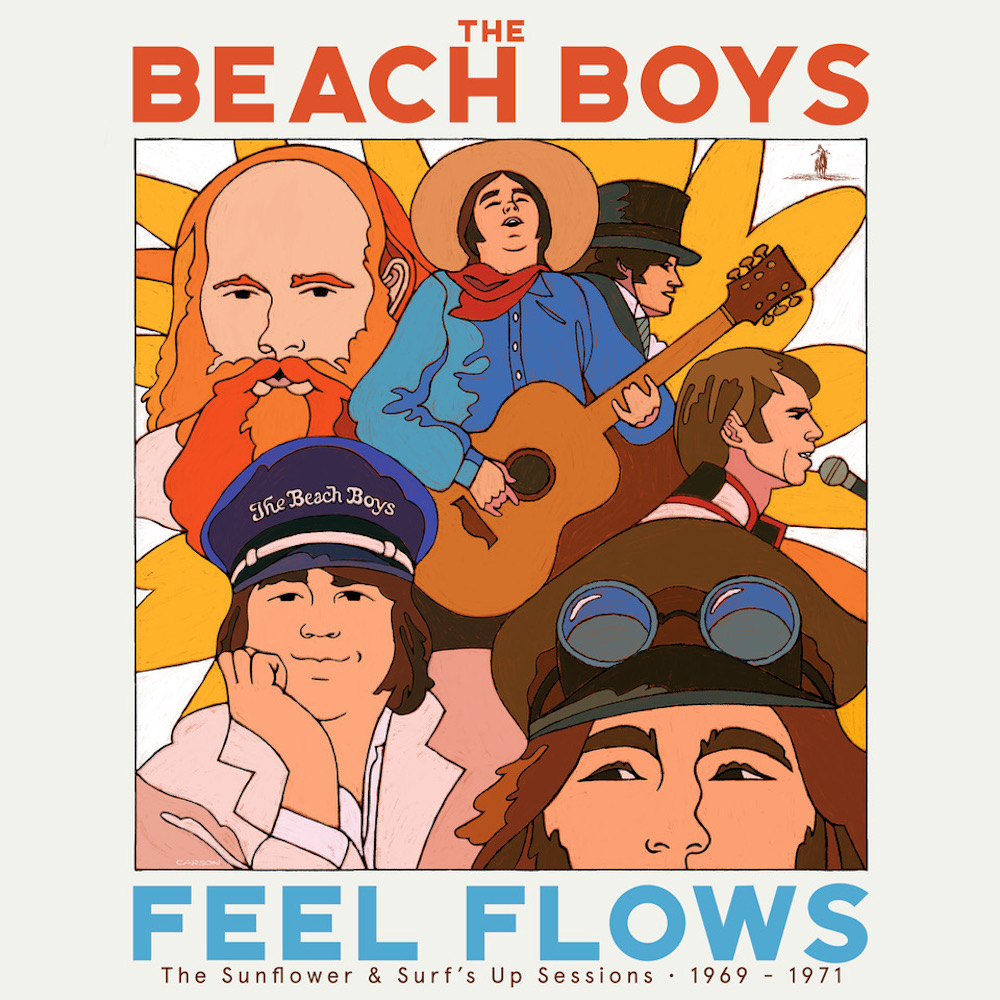 The Beach Boys will undoubtedly be most remembered for the first two chapters of their career. In the first, which ran from 1960 into 1965, they produced a long list of irresistible harmonic numbers about surfing, cars, and young love—songs like “California Girls,” “Surfin’ Safari,” “Help Me, Rhonda,” and “Don’t Worry, Baby,” to name a few. Then in 1966 and 1967 came the period when group leader Brian Wilson moved into uncharted territory with dazzling results on inventive albums like Pet Sounds and the long-unreleased Smile.

The Beach Boys’ greatness didn’t end with that era, however. True, their later work is not as consistently outstanding, but it contains more than a few high points and garners less attention than it deserves. For evidence of that, look no further than Feel Flows: The Sunflower & Surf’s Up Sessions 1969–1971, which will be released on August 27. This collection, which features five CDs housed in a 48-page hardcover book, showcases the band’s resilience and resourcefulness at a time when their Capitol Records contract was ending on not-so-great terms and Brian was partially sidelined by mental health issues. One reason for the strength of the Beach Boys’ material during this period is that all six members of the group stepped up to the plate to contribute memorable songs and lead vocals.

The original Sunflower and Surf’s Up—which first appeared in 1970 and 1971, respectively—do incorporate the occasional loser. “Student Demonstration Time,” which weds words by Mike Love to the music from Jerry Leiber and Mike Stoller’s “Riot in Cell Block 9,” is much closer to pretentious than profound, for example, and the nods to environmentalism, “Don’t Go Near the Water” and “A Day in the Life of a Tree,” also feature banal lyrics.

But you’ll find lots of standouts on these records. Bruce Johnston contributes the sweetly nostalgic “Disney Girls,” for instance, and Carl Wilson adds “Long Promised Road” and “Feel Flows” (the latter with flute by jazz artist Charles Lloyd). And like George Harrison in the Beatles, Dennis Wilson emerges as an underused asset with ballads like “Forever.”

The best tracks, though, feature Brian as writer or co-writer, including the poignant “Til I Die” and such bright, upbeat numbers as “Cool, Cool Water,” “Add Some Music to Your Day,” and “This Whole World.” Then there’s Surf’s Up’s title track, a number originally intended for Smile that weds a typically abstruse Van Dyke Parks lyric to one of Brian’s more adventurous melodies.

Remastered versions of the two albums that contain all these songs are just a starting point for Feel Flows, which features more than six-and-a-half hours of music. Assembled by Mark Linett and Alan Boyd, who put together the Grammy-winning Smile Sessions, the box incorporates live recordings, demos, radio promos, and more. Amazingly, given the huge amount of archival Beach Boys material that has appeared over the years, only 25 previously issued tracks—including the 22 numbers from the original LPs—are among the 133 selections. (A promo video for the box erroneously promises 135.)

Like many similarly sized box sets, this one does include some content that seems likely to interest only the most fanatical fans, such as instrumental backing tracks and versions and mixes that differ only slightly from the well-known recordings, Still, you’ll find lots of fascinating obscurities in the package’s long list of bonus materials. It includes spirited concert versions of six tracks from Sunflower and five from Surf’s Up, for example, as well as an extended rendition of “Til I Die” with alternate lyrics.

Also here are an instrumental snippet from Lennon and McCartney’s “You Never Give Me Your Money” and a reading of “Seasons in the Sun,” the 1974 worldwide chart-topper by Terry Jacks, who worked with the Beach Boys on Surf’s Up. There are notable, previously unheard renditions of songs such as Al Jardine’s “Susie Cincinnati,” a number that would appear on 15 Big Ones in 1976, and “Good Time,” which Jardine wrote with Brian for 1977’s The Beach Boys Love You. Another standout is Mike Love’s “Big Sur,” a song that has never previously been released in any version, though it sounds related to his “California Saga/Big Sur” composition on 1973’s Holland.

The band’s excellence didn’t end with the years covered by the Feel Flows box: still to come were such gems as the aforementioned The Beach Boys Love You, which ranks with Brian’s most endearing work. But this box alone should be enough to convince many listeners that the group’s latter days were underappreciated.

Colin Hay, I Just Don’t Know What to Do with Myself. If you recall the Australian band Men at Work, which topped U.S. charts twice in 1981 with “Who Can It Be Now?” and “Down Under,” your strongest memories probably involve Colin Hay’s distinctive lead vocals. Hay is also an accomplished composer—he wrote or co-wrote much of Men at Work’s material, including both of the group’s hits—but on his latest solo album, he puts his pen aside and interprets some of his favorite pop songs by other artists.

His well-arranged and -orchestrated covers, which have been wisely mixed to emphasize his vocals, include a preponderance of first-rate numbers. In addition to the Burt Bacharach and Hal David title cut (a hit for Dusty Springfield), the program embraces Ray Davies’s “Waterloo Sunset” (the Kinks), Jimmy Webb’s “Wichita Lineman” (Glen Campbell), John Lennon and Paul McCartney’s “Norwegian Wood” and “Across the Universe” (the Beatles), Gerry and Fred Marsden’s “Don’t Let the Sun Catch You Crying” (Gerry & the Pacemakers), Ronnie Lane and Ron Wood’s “Ooh La La” (Faces), Justin Currie’s “Driving with the Brakes On” (Del Amitri), Stevie Winwood’s “Can’t Find My Way Home” (Blind Faith), and Jimmy Cliff’s “Many Rivers to Cross.”

Granted, it’s hard to go too wrong with material this good but Hay does more than avoid missteps. He shines.

Gram Parsons, Cosmic American Music: The Rehearsal Tapes 1972. You have to be a pretty obsessive Gram Parsons fan to want to work your way through this CD, which was pieced together from five listenable but considerably less-than-great-quality cassette recordings and includes a preponderance of rough-edged performances. Then again, there are lots of obsessive Parsons fans around, and with good reason: the work he did in his short life—with the Byrds, the Flying Burrito Brothers, and as a solo artist—was terrific; it was also a big factor in bridging the gap between rock and country.

This 22-song, 79-minute set, which first surfaced in 2003 and has just been reissued, finds Parsons testing out early versions of songs that wound up on GP and Grevious Angel, his two solo studio albums, including such originals as “How Much I’ve Lied,” “A Song for You,” and “Still Feeling Blue.” He also plays around with Harlan Howard and Tompall Glaser’s “Streets of Baltimore,” George Jones’s “That’s All It Took,” and Joyce Allsup’s “We’ll Sweep Out the Ashes in the Morning” (with Emmylou Harris), all of which would appear in much more polished versions on GP. In addition, Parsons tackles some of the country classics he admires, such as Johnny Cash’s “Folsom Prison Blues” and Hank Williams’s “Cold, Cold Heart.”

This certainly isn’t the first Parsons-related record you should buy—it’s not even among the first half dozen—but if you already own all the others, you’re probably the sort of person who’d want this, too. The sound quality and some of the performances may be subpar, but serious fans will nevertheless be intrigued by these early tracks.

Ellen Foley, Fighting Words. More than 40 years after she traded verses with Meat Loaf on Bat Out of Hell’s cleverly scripted “Paradise by the Dashboard Light,” Ellen Foley shows on her fifth solo album that she can still come out fighting, at least when her material is up to the task. Though several of the tracks sound perfunctory and dated on this rock set—which her longtime collaborator, Paul Figlino, mostly composed—the CD contains enough winners to make me want to keep an eye out for whatever Foley does next.

“I Found a Love,” for example, offers a strong take on the Wilson Pickett classic, while “This Won’t Last Forever,” which she co-wrote with Figlino, seems redolent of the Ronettes. “I’m Just Happy to Be Here,” a duet with Karla DeVito, captures the anthemic, Phil Spector–influenced Todd Rundgren production of Meat Loaf’s albums, on which DeVito also sang; and “I Call My Pain by Your Name” is a surprising and rather successful flirtation with country. Foley does a good job, too, with Jim Steinman’s “Heaven Can Wait,” a number that first appeared on Bat Out of Hell.