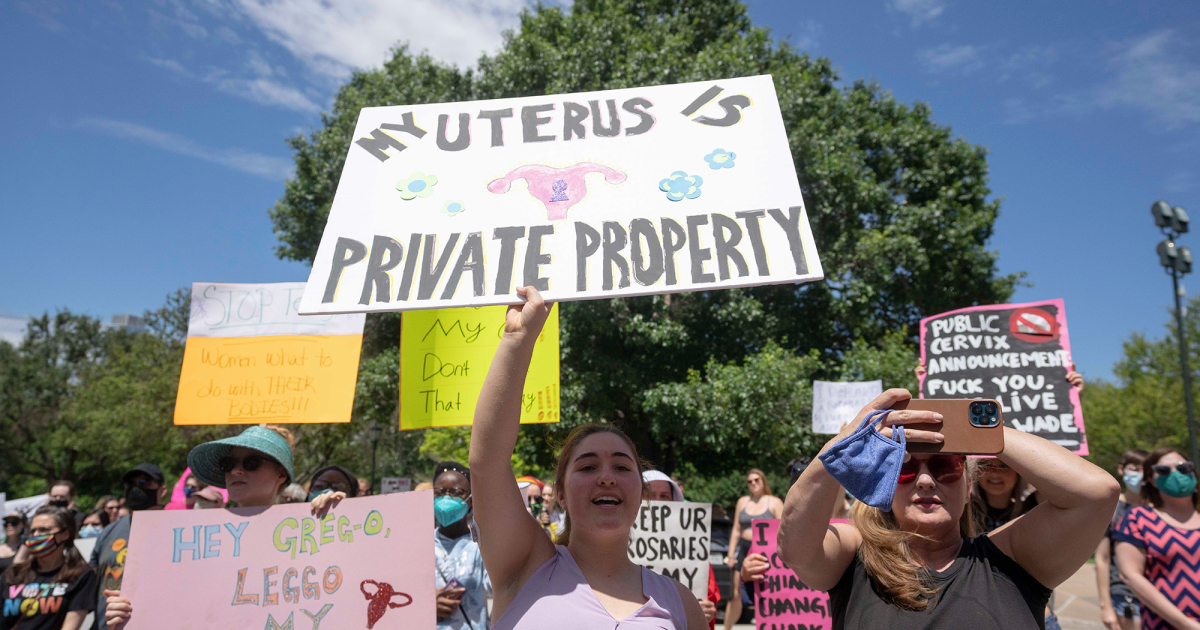 Supreme Court ignores unconstitutional bans on abortion in Texas, thus enslaving women’s bodies at the behest of the state.

No State shall make or enforce any law which shall abridge the privileges or immunities of citizens of the United States; nor shall any State deprive any person of life, liberty, or property, without due process of law; nor deny to any person within its jurisdiction the equal protection of the laws.

14th Amendment to the U.S. Constitution

The moment former Supreme Court Justice Ruth Bater Ginsberg stopped breathing the rights of women were put on life support. This overwhelming conservative court is now poised to strike down the 48-year-old Roe v Wade decision that we were told (like we were told the 20-year Afghanistan War would be swift) was “decided law.” It is not. It never was. Until an amendment exists, (but it kind of exists, doesn’t it? – more on that in a couple of paragraphs), there is no such thing as “decided law.” They are likely coming for marriage equality as well. If the slow gutting of the Civil Rights Act is any indication, there is some radical judicial shenanigans to come.

But this is not a column about the vagaries of political justices or religious fanatics or the age-old arguments about fetal rights or heartbeats. This is about one thing, and has always been about that thing: Can a democratically constructed government based on a human’s right to live free in a nation built on the concept of law dictate what happens inside the body of its citizens?

The answer to that question must always be no. The government should not demand you remove your appendix or change your sexual organs. There are anti-choice, pro-lifers who bitch about the strong suggestion they receive a vaccine to save their lives and the lives of other fellow citizens, many of them family and friends. Not a mandate. A suggestion. Yet, they wholly support the government dictating what goes on inside their bodies.

Oh, no, wait a minute, not everyone’s bodies. Women’s bodies. Just women. So, um, it is prejudicial on top of the other life and liberty stuff. Oh, I get it. Sure. And so, the end of Roe v Wade, a correct legal decision based on the basic principles of liberty, would mean that there can come a day when the government could force a woman to terminate a pregnancy. Oops. Yes. It would. Why wouldn’t it? Roe v Wade protects the systemic control over the bodies of more than half our citizenry. It protects women. Women are citizens. Thus, striking it down makes women’s bodies slaves to the state. This issue should be argued on the merits of the 13th Amendment.

Okay, so maybe the 13th Amendment is going too far – not sure it is – but there is always the 14th Amendment, which grants the rights of citizens (women, the whole of women, including the uterus) over draconian laws instituted by lunatics. Of course, that amendment, passed in 1868, only granted these rights to men. It is specifically in the wording. Men only. But then the Nineteenth Amendment, passed in 1919, supersedes it. Allowing not only women to vote but making them equal in the eyes of laws previously passed for men. So, now we’re up to three amendments. How many do we need to grant equal rights to women? Apparently more, as in the 1970s there was the proposition – stymied, of course – for an Equal Rights Amendment because maybe four fucking amendments might get women where they need to be.

Which brings us back to this: My daughter. Your daughter. Our daughters. Slaves to the state. None of them would have control over what happens inside them, now that Texas flouts the constitution, as they do, and many states do now with voting rights, and pushes this issue to its logical end – enslaving women. All of these things to be dictated by government over citizens. Unconstitutional. Period.

This has not been a good year for the constitution or democracy. It starts with a president trying overturn a free and fair election and become a dictator, then anarchists attacking the state capitol, and now the Supreme Court paving the way to enslave women’s body as the behest of the state.

Yeah, and we fear the Taliban halfway across the globe. No point. It’s here. And now. Next up, burkas.

I shan’t get into the spectacular level of hypocrisy in the conservative, anti-government, Don’t Tread on Me clan that demand that women cash in their uterus. It is an appalling lack of ideological self-awareness, or really awareness or rationality. It is, in fact, the very definition of irrational, like most of the arguments to allow the government to take control of women. Government control over the body of a citizen of the United States – this is where we are heading.

We need to get our heads around that. It is coming. Both of Donald Trump’s SCOTUS appointees are intractably anti-Roe v Wade in previous rulings, comportment and commentary. We’ve already covered this. That particular ship has left the dock a while ago. It is a done deal. Its time is limited. And for those who have fought on the front lines against it for decades, your time has come. Good for you. But that does not mean it isn’t draconian and wrong and has no place in a society built on the concept that we are all free. Not women. Not for long.

Women have taken your shit for as long as there has been anything known as society – long before anyone considered freedom or that women were not property. Women. Property. To marry off and auction off and stigmatize and marginalize and objectify and demean and corner and make less-than. They’ve been on the butt end of religion and law and social mores and bigotry. But since 1973, when a woman couldn’t own a credit card or be a doctor or get a loan, they had at the very least, control of their bodies. And this is our ticking time bomb now. This non-ruling ruling by the highest court in the land means, for now, there isn’t a fucking thing that can be done about it.

But right now, not tomorrow or next week or some time when we get our shit together, it is time to begin working out a plan to up-end anti-choice candidates for any office. It should be the democratic litmus test of all litmus tests. It used to be, but we got soft. The anti-choice crowd were hoping we would sleep on it – and we did. They made it their crusade. And now they are reaping the benefits. The only way to protect the rights of women – even the unknowing women who support the pro-life movement at the peril of their own rights – is to upend this and make it our moral fight. Stop playing defense and get on offense to make it a law and maybe even an amendment, or at least evoke the rights granted by three amendments and the existence of a ratified constitution that the systemic control of any citizen is illegal and immoral.