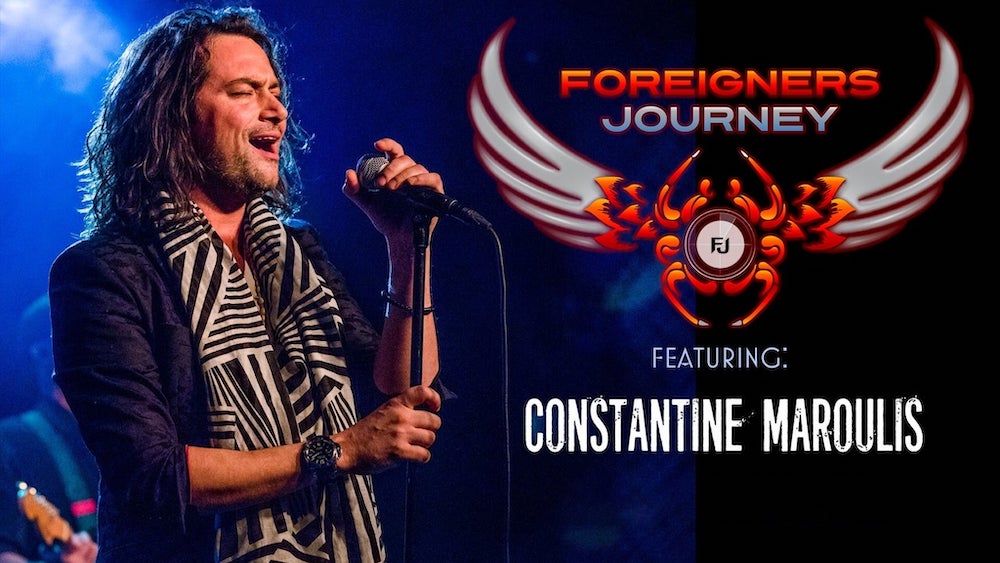 Foreigners Journey is a tribute band – that much is true. It’s not too much of a throwback show, though there is an air of nostalgia swirling around the rafters when they hit the stage. As the Boston-hailing band took on Bergen County’s Performing Arts Center this weekend for the New Jersey debut, concert goers quickly realized that with Constantine Maroulis taking the lead, Foreigners Journey had become much more than a classic rock revival.

Maroulis has seen his fair share of stages throughout the course of his career, ranging from those that were nationally televised to those found in hole-in-the-wall clubs. Somehow gritty and flamboyant at the very same time, the Brooklyn-born rockstar is the perfect choice of frontman for Foreigners Journey. He doesn’t age, which is great for a performer with such a distinctive look. Long hair that’s flipped around, looking taller than most in skinny jeans? That’s a star. Although, it is the way that he makes a smoldering look into the crowd look charming that proves his versatility. For every man and woman throwing themselves at him, there is another set of fans looking up to him for all the right rockstar moves.

The former American Idol contestant has found a way to balance his quick wit, bad-boy aura, and alluring talent with immense fatherly love, Broadway-style theatrics, and casual anecdotes. A contradiction of sorts, the old soul that Constantine Maroulis is works well for the crowd coming out to appreciate the thirty-something-year-old music of Foreigner and Journey (and Queen and Quiet Riot, if you’re lucky).

The BergenPAC show opened with “Separate Ways” by Journey, because it was about to be a journey… back to the eighties. Foreigner’s “Double Vision” followed, kickstarting how the band, which consisted of Paul Kochanski on keyboards, Art Mambuca on drums, Kevin Herrera on guitar, and Joe Pettengill on bass, flip-flopped between the two seminal eighties bands to create a robust, slightly nostalgic, but rocking setlist. Maroulis led these songs, singing them accurately, but also taking them to new heights as a stellar showman. He jumps off of the raised drum set and runs into the crowd, serenades fans young and old, and interacts with the audience immensely mid-song. Steve Perry and Lou Gramm were both exceptional and strong vocalists. Constantine Maroulis did their abilities and songs justice even while dancing around the venue and encouraging fans at the show to do the same.

It was during the fourth song of the first set, “Long, Long Way from Home,” that the band filled out even further with the addition of a saxophonist. Everybody now on the stage was at the absolute top of their game, killing every solo that reverberated off the high ceilings of the PAC, and stunning everyone in attendance – all while paying articulate homage to both Foreigner and Journey.

“Urgent” was the first song that got the audience wholly and fully off their feet, but Maroulis did ask them to join in with the energy that the 1981 hit of Foreigner exudes. Being in the audience, I can say that it felt as though much of us had to get back into the swing of things – and by things, I mean rocking out to live music. While the venue was strict with COVID-19 precautions such as indoor mask-wearing, there was no decrease in excitement or enjoyment. All we needed was a classic song and a little push from the lead singer. Later in the set, “Head Games” and “Jukebox Hero” also awoke something in the venue that was much needed after many months of little to no live music. Everyone was glad to be on their feet.

Foreigner’s “Waiting for a Girl Like You” was a somber, stripped, and solo spotlight moment for Maroulis. It started out evocative and endearing before building into something almost more emotional as a bigger, more actorly number. When discussing theatrics and dramatics, though, one has to look at the lead guitarist, Kevin Herrera. The long lost lovechild of Chris Cornell and Jimi Hendrix consistently had the most intense guitar solos that you could see were felt through his whole body. With his head thrown back and fingers twitching along the electric guitar’s strings, there was something almost mystical about what he could do within songs already notable, rocking, and classic. Journey’s own virtuoso, Neal Schon, should be proud.

After a brief intermission, Constantine Maroulis and Foreigners Journey returned with “Be Good to Yourself,” once again kicking a set off with a Journey staple. In between these hits, though, was a personable approach to rock and roll and cover songs. The Boston band and their Wyckoff native frontman laughed about Tinder and MySpace, joked about co-parenting, and celebrated the venue that was hosting them and that Maroulis himself exclaimed was going to be undergoing a renovation next year. This was special for the Tony-nominee, having grown up and remained a Northern New Jerseyian, as well as raising his daughter there. In fact, the youngest Maroulis was at the show – as a merchandise vendor! She and her mom, Angel Reed, were selling merchandise for the band before and after the concert, chatting with those who stopped over, asked questions, and praised the singer. Malena, his daughter, was eloquent and poised, giving the night a new sense of grounding outside of the riveting rockstar antics on stage.

A great example of that was when Foreigners Journey ripped into “Feels Like The First Time” and “I Wanna Know What Love Is.” From singing directly to a fan in the audience to jumping into an empty seat to stand above the crowd (while within the crowd), Maroulis made these two tracks a production in and of themselves. It was entertaining and lively even when he was back on the stage with the band singing such pertinent melodies. The back up vocals, and singing from the audience, enhanced these songs and much of the setlist greatly, regardless of how well the frontman stands on his own. At one point, he earnestly stated, “I want to dedicate this one to the brave men and women serving our beautiful country,” before launching into a sweet and humbling cover of “Faithfully.”

The night with Foreigners Journey and Constantine Maroulis came to a close with “Anyway You Want It” and “Don’t Stop Believing,” which came about after some playful teasing with the audience. The band joked with the crowd about what songs could possibly be next, when the biggest hits for the artists at hand had yet to be played. It wasn’t Barry Manilow’s “I Write the Songs,” nor A-ha’s “Take On Me,” as opposed to what the group joked about and harmonized on while onstage. Every song and every band member and every act and every moment was top tier, theatrical, yet personable and lighthearted. To return to music in such a way – by going back to a “sexier time” with guitar riffs and keytars and romance at the forefront of song after song – felt euphoric. Fun and authentic is the understatement of the year when it comes to describing a live show put on by Foreigners Journey.