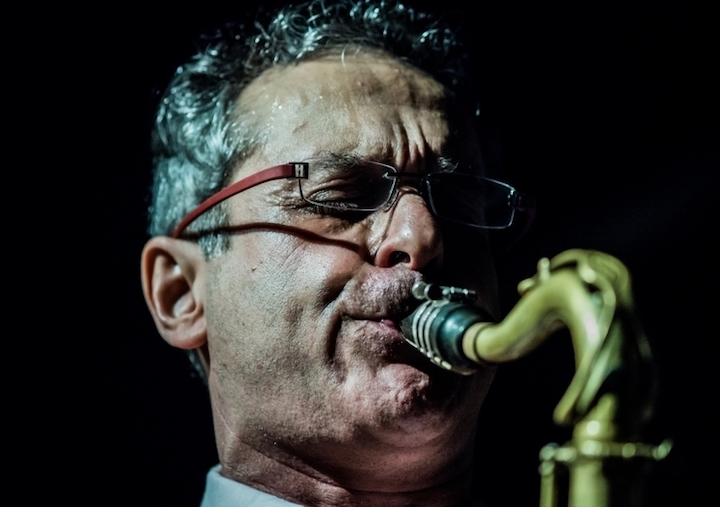 He’s a Brazilian with a rare disease who makes his home in New York City. Avant-Garde tenor saxophonist Ivo Perelman has no known precedent for the kind of outer-space solos he takes. Maybe John Coltrane. When Ivo improvises, he splits the stars into exploding fragments of fascinating invention. Upon the occasion of his 60th birthday, he’s self-releasing Brass & Ivory Tales, a nine-disc boxed set wherein each CD has him interacting with like-minded musicians to make the kind of music that seems to change with every listen. I know that’s technically impossible as the music has already been recorded but with Ivo Perelman, the impossible is reduced to improbable and thus attainable.

At 20, he attended Berklee College of Music while living in Boston. A year later, he moved to Los Angeles, ultimately ending up in NYC, where he continued to expand his artistic palette as a visual artist with paintings and sketches on display in art museums all over the world.

He’s recorded over a hundred albums in 32 years.

And that brings us to his malady.

It’s called synesthesia.  Four percent of the world’s population has it. This neurological phenomenon makes you hear colors and see music. For such a brilliant artist as Ivo, it must be a boon. Can he actually see the sound emanating from his sax? Can he actually hear the colors he uses in his paintings?

My favorite Ivo recording has always been The Art Of Perelman (2017), a seven-disc box with his partner-in-musical-crime Matthew Shipp. Pianist Shipp always seems to be able to anticipate exactly where Ivo may go.

Brass & Ivory Tales has no known structure, no melodic or harmonic restraints. Like a fire that starts due to spontaneous combustion, much of this burst into spontaneous composition. It sounds foreign upon first listen but its inner logic makes itself known eventually. Ivo oftentimes uses the altissimo octaves of his instrument that are actually above the written range of what a tenor sax is even capable of. It comes out as a shriek or a squeak. Yet most of this nine-disc box is lovely, accessible, lyrical and sentimental in a kind of way that almost befuddles the senses. I found myself longing for something that did not exist. There’s an inherent yearning in these grooves that could stop on a dime in favor of an escalating free-flow that spirals out of control. Almost.

Minneapolis pianist Craig Taborn is one of his foils. Now in Brooklyn (which has eclipsed Manhattan as one of the jazz capitals of the world), Taborn is a whirlwind of conflicting emotion. He uses his 88 keys in combinations that recall Oscar Peterson but he’s much more “out-there.”

The disc with Vijay Iver, another New Yorker, is a highlight. This composer/pianist/bandleader/producer/educator has the kind of pianistic touch where you’d swear he has 20 fingers.

It would be fair to say that Ivo is taking the sax into uncharted waters, places where no sax has ever dared to go. Yet his brilliance is couched in terms of listenability. How could someone be so radical  in approach yet so accessible at the same time? Even Sonny Rollins – 91, ailing, and maybe the greatest living saxophonist – has said of Ivo (when questioned in downbeat magazine’s “Blindfold Test” where an artist is asked to comment upon music without knowing who it is), “very good, and he’s got his own thing. High marks!”

Read through Ivo’s press clippings and you’ll find all sorts of kudos. He’s been called “exuberant,” “excitingly tantalizing,” “relentlessly innovative” and “intensely disconcerting.” Some have called him “perhaps the greatest living musical artist of our time.” Gunther Schuller [1925-2015] – the respected composer/conductor/multi-instrumentalist/author/historian/educator/publisher – called Ivo “a unique genius.”

I’m still not through all nine CDs. I’m sure there are more surprises, roadblocks, flights-of-fancy, circuitous detours and dreamy escapades. It’s all part of his charm. Greatest sax man ever? Ivo Perelman is certainly in the conversation.