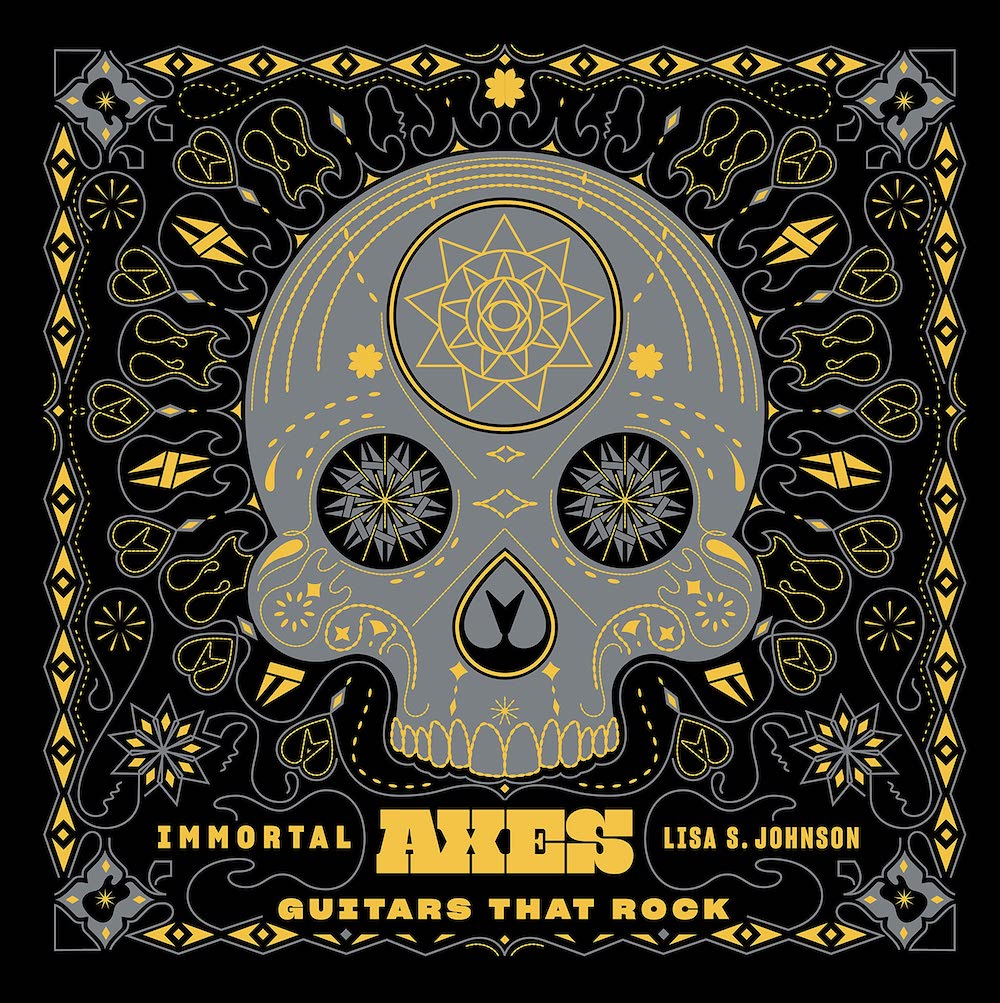 Lisa S. Johnson Immortalizes Axes Like No One’s Done Before

Immortal Axes: Guitars That Rock is the undisputed champion of photo books. It clocks in at a little over five pounds and packs a powerful punch as it documents the instruments of B.B. King, Jimi Hendrix, and more than 150 music legends.

Immortal Axes is a piece of art. The cover is visually appealing and features motifs with meaning. Johnson gave it this title because, “The player breathes life into a guitar, immortalizing it. When the guitar is eventually passed on to another or an artist leaves this earthly existence, the instrument, inanimate of the physical realm, remains the repository of the music it made for eternity.”

Every photograph may have an instrument with blood, sweat, tears, or all three. Sometimes you’ll see stickers or sultry females. There are a few shots with their super cool straps, a furry friend, and even the artists that wield the machines of music. The stories and history surrounding the instruments make the book shine even brighter.

Johnson used her impeccable eye for detail by using a macro lens and a whole bunch of inspiration. She has done it before, too, with her debut, 108 Rock Star Guitars, but she really raised the bar with Immortal Axes.

Immortal Axes comes with impressive company. Peter Frampton penned the Foreword. He writes, “Guitars are special instruments…They need to be treasured and documented for future generations. In many ways, that’s what this wonderful book is all about: preserving guitar history.” Lonn M. Friend composed a cosmic guitar tale. Brad Tolinski, who spent 25 years as Editor-In-Chief of Guitar World Magazine, edited the book. Suzi Quatro created an eloquent Afterword. The trailblazer and all around amazing rock and roller wraps up everything on a high note.

A few of the axes I crushed on in the pages are the Elvis Presley 1937 Supertone Hawaiian with tropical scenes on the front and sides, the stunning James Burton Fender Telecaster JB Signature “Hot Rod,” the John Mayall JM Custom Handmade beautifully embellished with silver and turquoise, the Steve Stevens black-ish purple 2015 Knaggs SS2 (photographed with the ray gun used to create the laser-like sounds on “Rebel Yell”), and the gorgeous Swarovski crystal Cry Baby Wah. Each one is special in its own way and choosing a favorite is nearly impossible.

Immortal Axes: Guitars That Rock is perfect for any music lover. It’s a great conversation starter, whether you’re debating the coolest guitar or discussing the important music history they hold in their strings.

TO PURCHASE YOUR OWN COPY OF IMMORTAL AXES: GUITARS THAT ROCK, CLICK HERE!