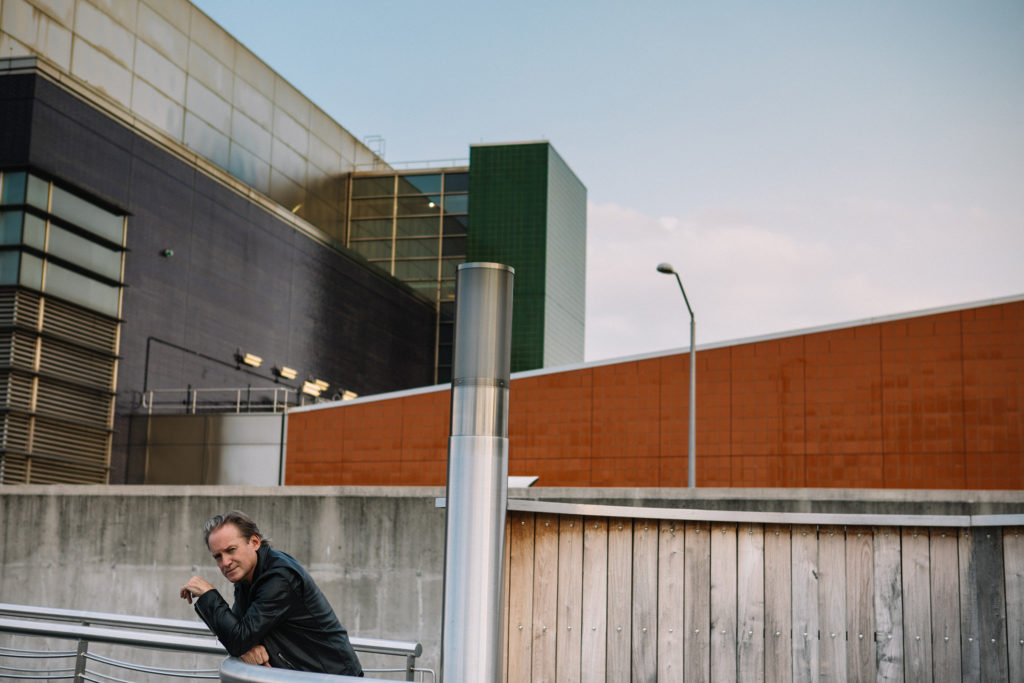 When singer-songwriter and multi-instrumentalist Kevin Whelan tired of his band The Wrens’ Guns ‘N’ Roses-like decade-plus wait to release a new album, he took his demos and headed into the studio, emerging under the name Aeon Station with an impressive collection of indie rock.

Titled Observatory, the new album from Aeon Station, which will be released on December 10 by Sub Pop Records, has spawned two singles, “Queens” and “Leaves,” both of which are already hits on indie rock charts and playlists, including Brooklyn Vegan.

To understand the impetus behind Aeon Station and its wizard behind the curtain Kevin Whelan we must begin with The Wrens, the Secaucus group who during the early nineties released the classic debut Silver (1994) and were touted by critics as the next big thing – the East Coast answer to the then Seattle music explosion. The Wrens had an innovative, infectious guitar-oriented indie rock sound that inspired the more recent alternative, emo-core and pop punk movements.

Today, however, the quartet of singer/bassist Kevin Whelan, singer/guitarist Charles Bissell, guitarist Greg Whelan, and drummer Jerry MacDonald are affectionately referred to as “The Greatest Band with the Worst Luck.” That label, however, only hints at the full story. Kevin Whelan recently spoke with The Aquarian about what actually transpired and how Aeon Station was born.

Nineties media believed The Wrens were going to explode out of the New York City/New Jersey Indie music scene. I was part of that guilty crew.

The critics had us believing we were going to be the next big thing, but when you look back at a humble band making records in their basement—recording 20-something tracks for each album – we adopted the XTC model. We thought we’d have a short career and we wanted to get all of our songs out.

In ’94, The Wrens released the now-classic Silver and became local phenoms. Then Alan Meltzer bought the tiny independent label the band was on, Grass, and turned into it into the successful major label Wind-Up (with Creed and Evanescence, among others). Did Meltzer merely let you fall between the cracks?

In retrospect, Meltzer was a really good guy. He just wanted us to go in an artistic [direction] that wouldn’t have been right. He met with me and [drummer] Jerry MacDonnell before purchasing Grass Records. He said, “I am going to buy [the label] from [owner] Dutch East India Trading because I believe in it. I like your band and I want to get behind what you’re doing.” Then Secaucus was released (in ’96) and he thought it was going to be a bigger hit than it was. Then our contract was up.

How did the relationship sour?

We were pretty broke [at the time] from touring. He offered us a million-dollar contract, but then we pulled something shady. We said we needed rent money, which we did, and he gave us ten thousand dollars in goodwill. He wanted us to sign and be this band we couldn’t be. When we said no, he got defensive. He said, “I gave you that money and you guys doubled back on me.” So in addition to pulling the contract offer, he refused to give us back the masters and rights to our first two albums.

The Wrens eventually released an EP [2002’s The Wrens/The Five Mod Four] and then a full-length [2003’s The Meadowlands].

Nobody wanted us, not our friends at Saddle Creek and no one at Merge. No record company was interested. Finally, Corey [Brown], who we had known since his record store days, said, “I’ll put it out” and started Absolutely Kosher, which he was hoping to build off of.

The Meadowlands was well received.

It came out to a nice reception, but it was a weird album. It came out in 2003 and slowly built momentum through 2008. It was first released in the US and, three years later, it was released throughout Europe. We received this nice little bump there and headed overseas to tour. The life of the album lasted a long time… and then we went dark.

Right, then nothing. The momentum came to an abrupt stop.

Early on, the band’s members sacrificed a number of things, including their work careers.

We all did, but we also did what we could to stay afloat. Jerry was a busboy at a casino and the rest of us took temp positions. We took the plunge, but it didn’t work out. Yes, we were all still talking and getting together, but our individual lives became our respective focus.

The Wrens have since become cult heroes.

We were just four working-class guys from New Jersey that believed in themselves and just kept doing it. I think that’s why so many people gravitated towards us.

The Wrens opened the doors for a number of artists as well as influenced a lot of artists.

We helped Conor [Oberst] from Bright Eyes go on his first tour. We brought Arcade Fire down [from Canada] for their first show [in the US]. I guess our luck has been skin to the guy next in line after the lottery winner.

I hear the band’s influence in a number of present-day indie rock bands.

That is nice of you to say, but I must admit, I have heard it, too. The angular guitar stuff and the song structures? It’s so nice to hear.

I thought I was done recording my music for a new album in 2014. I didn’t record anything after that. Not a lick. Not a note. It just sat there and waited.

Are The Wrens over?

In my view, no. I started the band when I was 17 and I love what we’ve accomplished in respect to everything. There are definitely complexities, but there are not many bands whose [line-up has remained intact] for thirty something years. I just didn’t want to wait anymore.

At what point did you say, “Long enough. I am going to record the Aeon Station record,”?

March 2021. That recent. During the pandemic, I starting to think about finally recording and working on some songs and, if The Wrens [record] finally happen,s great. I was tired of not doing music and not doing it for myself.

My wife and I have two children, one of whom is autistic. He inspired me to say, “My time is short and I want to do this for him.” So last December and January, across just four days, I went into the studio and I wrote and recorded these other songs. But it wasn’t until March that I decided I was tired of waiting and put everything together.

Why did you decide to call it Aeon Station?

I wanted something [vastly] different from The Wrens. It took me eons to get here and I am in this station of life.

The album’s cover art of a half-completed office building is striking.

Observatory’s first single, “Queens,” has been well received, but when will the full album be released?

SubPop will issue a few more singles monthly before releasing the album on December 10.

How did your relationship with Sub-Pop come about?

In 2014, they signed The Wrens. Throughout the years, they have been incredibly supportive. When I finished the record, I wasn’t concerned who, if anyone, put it out. I’m older now. I wouldn’t have cared if only three people liked it.

The reception to the single shows that more than three people like it.

And no one is more shocked than me!

People have been waiting for this music for more than a decade.

Some of this music was done a decade ago, but I am proud of this record. I am happy to finally share it and see what’s next.

Will you be performing this music live anytime soon?

Yes. I’m just trying to figure out how to do that. I would love to perform the new music with some of the guys from The Wrens or some other people.

[Author’s note: Ironically, just days after this conversation, Kevin posted a photo on the Aeon Station Facebook page showing him in a rehearsal space with Greg Whelan and Jerry MacDonald. It was then announced that Aeon Station would be appearing at next year’s SXSW festival in Austin, Texas. There have also been unconfirmed rumors of local “warmup” shows.]