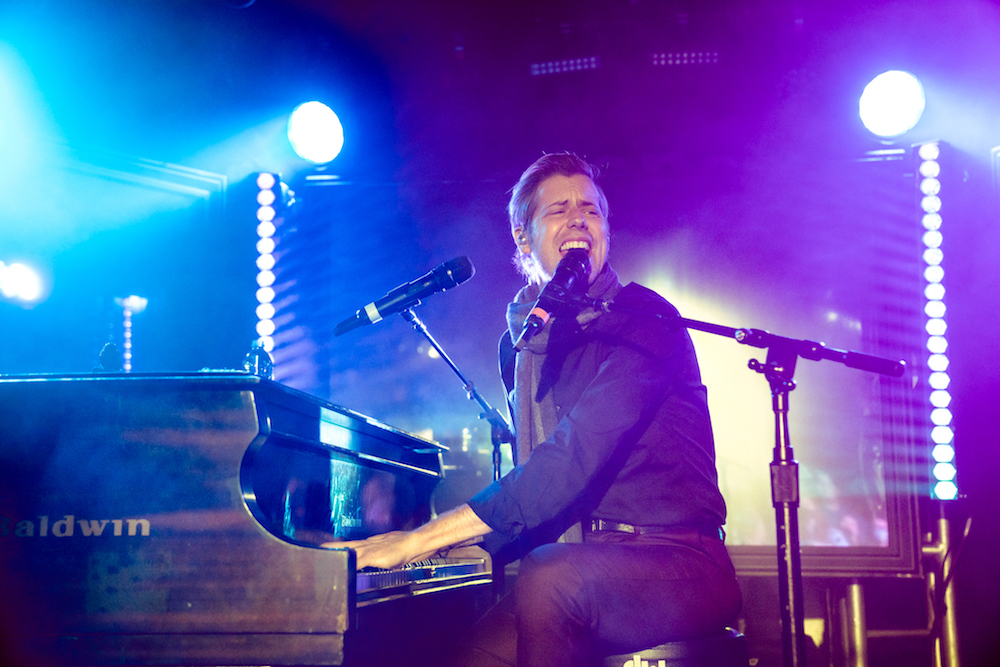 Experiencing the Magic of the Three Pianos Tour at The Stone Pony / November 4, 2021

On a comfortably chilly day in Asbury Park, three exceptionally talented acts joined forces with a passionate and devoted audience to create a sing along like no other before. Andrew McMahon in the Wilderness and Zac Clark performed re-arranged versions of fan favorites, stripped down with gorgeous detail, while Annika Bennett and bandmate Charlie Colbert absolutely killed it on their first ever tour. The pandemic changed a lot of things about the atmosphere for concert-goers, and the artists acknowledged this by thanking fans for coming out to party with them, though times are still tough. Everyone was glad to be back, hanging with friends and loved ones for a night of throwbacks and special surprises.

The first to take the stage was Zac Clark, a man of many mystical and musical talents as we learned in our recent interview with him. Zac has been touring with Andrew McMahon for several years, having previously been in Wilderness himself and now touring alongside them performing his solo work. He released his newest and most personally encapsulating record, Holy Shit, September 24. The six-foot-something pink-hued wizard took to his florally adorned piano, performing acoustic renditions of stand out tracks from his newest album, while also playing fan beloved staples. His fine-tuned set included “Doin It,” “Don’t Just Love Me Cause You’re Lonely,” “Holy Shit,” and “Mountains.”

“Doin It” was a crowd pleasing opener, as the subject matter of living life to the fullest despite uncertainty is something anyone could relate to, or even learn from. He especially connected with his audience while serenading us with the moving and upbeat “How Wild Are We” and what I consider to be his most impressive ballad, “Outlaw Lovers.” He talked about his relationship with the idea of love: that love is not necessarily a relationship with another person, but something bigger than all of us – a universal love. Clark has a special way with words, almost speaking in poetry onstage and off. A wide grin could be seen on his face as the crowd sang along with him and his piano. Enamored fans smiled wide, as well, when Zac handed flowers to the front row before his exit.

Annika Bennett’s heavy metal band style logo lit up the monitors on either side of the stage when The Stone Pony patrons welcomed her and bandmate Charlie Culbert. Don’t let this indie duo fool you; though this was a primarily acoustic show as Culbert accompanied Annika on an electric drum machine, keys, and bass guitar, delivering a beautifully rich sound that sparkled paired with her reserved, emotional vocals. Bennett played her popular tunes such as “Sober Up” and “Hypochondria.” Her songwriting and stage presence are reminiscent of the likes of Phoebe Bridgers and Lucy Dacus, but with a vocal style that is all her own. You could easily tell that Annika is a natural and that this won’t be the last we see of her performing live. It was a pleasure to see her perform on her first tour and to witness a loving fanbase welcoming her to the family with open arms.

Andrew McMahon and bandmates Mikey (The Kid) Wagner and Morgan Paris made their long anticipated entrance, opening with a solo-Andrew tune, “Synesthesia.” As a passionate fan, I see colors when I hear his voice, too. They played a handful of Wilderness tunes such as “High Dive” and “Ohio” before diving back into the deep end of his catalogue with “She Paints Me Blue,” a Something Corporate ballad written many years ago for a special woman that he calls his wife today. It was a night of anecdotes and tales, old and new.

During the main set, few Wilderness tunes were played, but rather a reworking of music decades in the making. It is truly amazing when an artist can continuously revamp fan favorites. Andrew’s content has aged so well. In high school he was selling out small venues with his buddies in Something Corporate and today he has found even more success spun from sharing his life experiences, including surviving cancer during his run with Jack’s Mannequin. He brought back the teen angst and tears in everyone with a rendition of “Cavanaugh Park” right before hitting the keys hard for “The Mixed Tape,” the first Jack’s tune for the evening. Appropriately, he played the two iconic origin story SoCo songs back to back: “The Astronaut” and “I Woke Up in a Car.”

I mentioned the stories, right? Jumping back into Jack’s Mannequin, Andrew got on the mic to give a shout out to his sister, thanking her for the life-saving bone marrow she gave when he was sick, and played the song that he wrote for her, “There There Katie.” The audience members held each other tight for an emotional performance of “Swim,” followed by a high energy cult JM classic, “Dark Blue.” He stopped to tell us about the birth of “Maps for the Getaway,” a Wilderness song written for his old house of which he and his wife would sit outside of and reminisce.

It was then Morgan Paris’ time to shine on a Lindsey Stirling ft. AMITW cover of “Something Wild.” McMahon tells us that he had always wanted the opportunity to play this song live and, conveniently enough, Paris came along with her masterful violin playing. After bringing tears to our eyes with a special performance of “Walking By,” a heart-wrenching SoCo love ballad, they began rounding out the set with some upbeat tunes like “Fire Escape” and “The Resolution.” In a wild turn of events, Andrew surprised a Konstantine heckler with a snippet of the awe-inspiring Something Corporate song that he only performs once a year at the annual Dear Jack Benefit. They closed out the night by inviting fellow artists Clark and Bennett onstage to send us off with the JM anthem of friendship, “La La Lie,” and everyone watched in awe while cheers broke out as Andrew swung from the rafters of The Stone Pony before bidding us a good night.

Andrew McMahon is an avid storyteller. He lives for telling his fans personal stories detailing integral parts of his life so that they can further relate to his music. The Three Pianos tour is about exactly that. Since the pandemic and the return of live music, artists want to connect with their audiences more than ever. Musicians are as  human as the rest of us, and human connection is a lifeblood. All three artists on this particular tour share that love for storytelling and sharing intimate parts or their life with fans. This was not just a rock show, it was a family gathering.