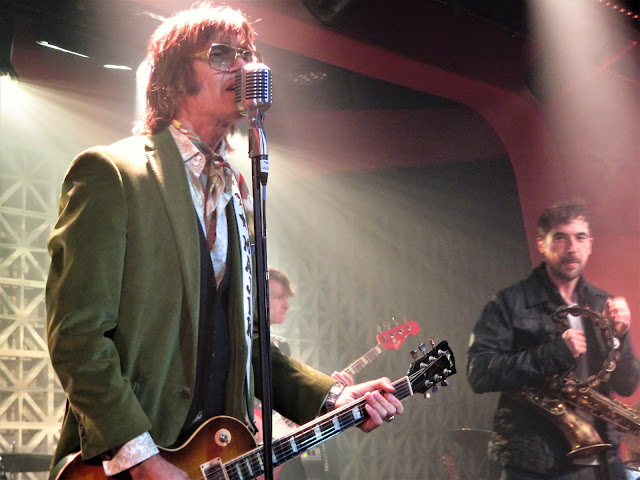 Strange Majik at Brooklyn Made on 11/10 / Everynight Charley

As New Yorkers continue to crawl out of COVID hibernation, at least five new venues in the area aim to attract music fans. The UBS Arena, Nebula, Brooklyn Made, Palladium New York and Stitch Bar & Blues have performers scheduled now and into the new year. All the venues are enforcing COVID-safety protocols.

“Made for music, built for hockey” is the slogan for the UBS Arena, the new home of the New York Islander hockey team and the latest music venue in the New York City area. Located just across the city line in Elmont, Long Island, the arena opened on November 20 for the 2021-22 NHL season and will host its first concert on November 28. The arena is a 50/50 partnership between the Islanders and Oak View Group, a recently-established sports and live entertainment development company led by former Ticketmaster and Live Nation executive Irving Azoff  and ex-AEG and Maple Leaf Sports executive Tim Leiweke.

The venue’s website claims it has the best sightlines and more premium lower-level seats for music than any similar venue. A state-of-the-art sound system leverages world-class acoustics to amplify the audio experience at concerts. Reportedly, even the seats have been designed with acoustics in mind, from the padding underneath the upholstery to the fabric of the coverings. The venue also boasts more restrooms per person than any arena in the New York area, and customers will be able to download an app to gauge bathroom wait times.

For the performers, the arena has an entire wing on the event level built for all facets of the touring party. Cars drive within a few yards of the performers’ green room. For the road crew, eight loading docks and back-of-house staging areas can accommodate up to eight semi-trucks at once for load-in and load-out, plus two more loading docks are on the event floor. Up to 24 trucks can be parked inside the arena. Performers and their crew can come and go quickly, permitting significant cost savings for artists.

Chicago performed the first concert at the arena as part of a benefit for UBS on November 19. Harry Styles will headline the arena’s first public concert on November 28. Erich Church, Genesis, Imagine Dragons, Tool, Journey, John Mayer, Los Tigres del Norte, and Twenty One Pilots will headline in coming months. The Weeknd was originally announced as the first music act, but he cancelled in order to do a stadium tour instead.

EDM producers use Nebula’s state-of-the-art d&b audiotechnik sound system to inspire up to 700 guests to dance on the 5,500-square-foot floor. Guest also gather on a 2,500-square-foot mezzanine level and a 3,000-square-foot lower level with three private club rooms dedicated to private groups, complete with their own dedicated bathrooms. Six huge video panels on the ceiling move and tilt individually or come together to form a venue-spanning screen.

While no live music bands are scheduled to perform, Nebula is attracting well known EDM producers. The venue held a preview weekend with GORDO (the house music alias of producer/DJ Carnage) on October 22 and Purple Disco Machine on October 23. Zedd and Camelphat also headlined pre-opening events in October, Zhu is playing this week, and Steve Aoki and Gryffin are among the producers coming in December.

Charlie Kaim, the proprietor of the Maracuja bar in Williamsburg. Brooklyn, in 2011 purchased a former steel factory and warehouse at 428 Troutman Street and spent eight years renovating the property, intending to create an entertainment venue called the Bushwick House of Music. The pandemic hit in 2020 and a discouraged Kaim sold the property for $9.4 million to the family of Kelly Winrich, a member of the band Delta Spirit.

In July 2020, Anthony Makes left his position as president of Live Nation New York to form his own independent concert promotions company, Brooklyn Made, working out of his home in Park Slope. Makes contracted to produce concerts year-round at the United Palace, a 3,300-capacity church and former movie theater in Washington Heights, Manhattan. Outside the city, the company contracted to promote concerts at the 1,800-capacity Capitol Theatre in Port Chester, NY, and the 15,000-capacity CMAC/Marvin Sands Performing Arts Center in Canandaigua, NY.

Makes and Winrich became partners and over 11 months converted the Troutman Street building into a 500-standing-capacity concert venue that also is called Brooklyn Made. They installed a million-dollar sound system, state-of-the-art lighting design by Jeremy Roth (Wilco, Nathaniel Rateliff, Mazzy Star), and a roof deck.

The venue also has two connecting operations. Connie’s, a bar and restaurant with a pool table and an outdoor courtyard, is open nightly until 4 a.m. whether or not there is a concert. The Standing Room, a coffee house/café with pastries and breakfast opens at 7 a.m. and becomes a cocktail/wine/tapas bar with a full kitchen in the afternoon until late into the evening.

Performers get to use four separate green rooms. Above the venue, performers have access to a wrap-around loft apartment furnished with $100,000 worth of furniture and a vintage jukebox. In milder weather, performers can use a private pool. In the winter, the pool will be transformed into a hot tub.

Palladium Times Square opened in September 2021 where the Astor Plaza movie theater, the Nokia Theater, the Best Buy Theater, and the PlayStation Theater used to be. The website describes the basement venue at 1515 Broadway as “a modern, state-of-the-art, and versatile venue with turnkey capabilities.” That means that the venue is available to rent for corporate events, private events, live music concerts, receptions, sit-down dinners, live broadcasts, fashion shows, press events, film screenings, and other events. The venue features a large standing room orchestra section, a large seating area toward the rear of the auditorium, two private mezzanines, and a wrap-around lounge area featuring three bars.

Upcoming concerts include the Jingle Jam with Sister Hazel and Phil Vassar, a Lost 80’s Live concerts featuring A Flock of Seagulls, Men without Hats and other acts, Monatik, Felix Calaviere’s Rascals with Micky Dolenz of the Monkees, a Freestyle Foreplay show with TKA, Judy Torres, the Cover Girls and other acts, and the Happy Together Tour 2022 with the Turtles, Chuck Negron of Three Dog Night, Gary Puckett & the Union Gap, the Association, the Vogues and the Cowsills.

Stitch at 247 West 37th Street has been open as a bar and restaurant since 2004 but recently evolved into a music club, Stitch Bar & Blues. The food menu includes burgers, wings, ribs, pizza and other American fare. Beyond the 50-foot oak bar on the main floor and under a private balcony bar and party space, the stage recently hosted popular blues locals including the Tangiers Blues Band and Dark Sky Hustlers. In the coming weeks, Felix Slim, Crash Combo, Aaron Pollock, Lord Wiffen and Spencer Nachman are among the music acts that will be appearing.