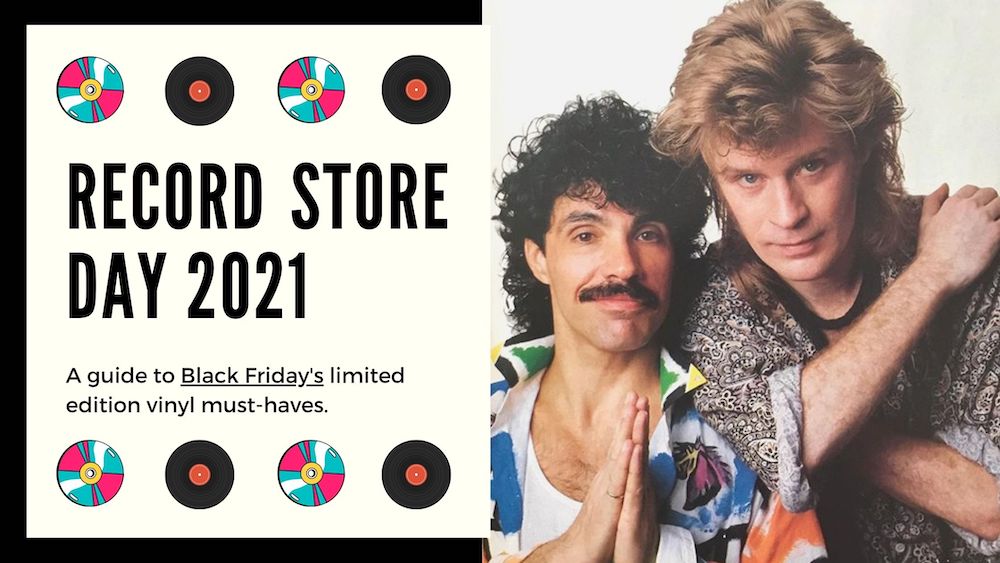 From Weird Al to Billie Eilish, this year’s Black Friday round-up of limited edition vinyl is an appreciation for musical diversity. Soundtracks, cover songs, original songs, generations, and genres are mixing and mingling among the crates. Diving into them and diligently flipping through could land you something you never thought you’d pick up. And that’s a good thing!

Like much of our overarching social climate, diversity prevails now more than ever. Even the way people consume music has shifted! Fans young and old are clamoring for physical copies of their favorite albums (cassettes, CDs, and more!) just as much as they are streaming on their app or website of choice. With that in mind, vinyl sales are on the rise and Record Store Day is still going strong, so whether you’re planning on spending Black Friday knee deep in the classics or with your eyes on the shelf labeled ‘New Releases,’ there is something for you… if you can even find it.

The beauty of Record Store Day, Black Friday RSD, and record store shopping as a whole is the methods of rummaging and searching needed to find what you are looking for (or didn’t know you were looking for). With vinyl manufacturers still feeling the effects of the COVID-19 pandemic and more vinyl lovers planning to head out to support their local music shops than ever before, some of these special edition music must-haves are going to be quite scarce. Although, they are still worth the trip, the scavenging, and listening. The thrill of the hunt is always present when heading out to record stores, but this year it’ll be felt a bit stronger with the increased diversity, so plan accordingly.

The A side of this 7″ vinyl is the “Live from the BRIT Awards” version of the latest James Bond theme song. The B side is a never-before-heard demo of the track. While an RSD Exclusive, fans of the alternative pop icon are lucky that there are 15,000 pressings set to be available around the country. The Grammy-winner and not even 20-year-old superstar has made her mark musically, but her addition to No Time To Die moved her name up on the list of true pop culture makers. Regardless of the movie being put on hold for the pandemic, the song (and Eilish) became a Grammy winner, making it unstoppable in its own right.

This RSD exclusive is a unique maxi single split between “Weird Al,” who needs no true introduction, and NYC legend Osaka Popstar, as well as The Ramones. The legendary punk rock band is not quite on the seven track 12″ record, but their songs are! Yankovic and Popstar collaborated with each other and teamed up with members of Black Flag, Ramones, and the Misfits for a live show paying an off-the-wall tribute to the edgy, upbeat rockers. There are only 2,500 of these dropping, by the way!

A folk rock LP consisting of 20 songs by Hall & Oates prior to their worldwide explosion – that is what this limited 20-track release is. Dubbed by the RSD team as “a great piece of rock history,” it’s sure to fly off shelves and out of crates with only 1,500 being released. No matter what era of Hall & Oates is your favorite, the classics are the classics, and this full-length record sets out to showcase them in their purest, earliest form.

Pressed into clear vinyl with splatters and speckles of black and gold, Judas Priest’s “Best of” on vinyl is a must for fans of all ages. An ‘RSD First,’ Black Friday shoppers are not only getting first dibs on this record, but first listens, too, with this release being specific to Record Store Day. Three sides out of the four that make up this double LP are original music – early 1978 favorites from the heavy metal frontrunners. The last side, Side D, is an original interview with the band from 1974 and 1975. Only 2,000 are dropping for RSD participants and metalhead alike, so keep your eyes peeled for this one (and its beautifully embossed sleeve)!

Fresh off his Rock & Roll Hall of Fame induction (that he willingly did not attend), Todd Rundgren is indirectly celebrating part of what got him there – his immense catalog of art rock hits. Healing was a 1981 LP that was spiritual and filled with intensity and infatuation, but almost had a divisive quality due to its overtly atmospheric nature. Still, its pop experimentation and rock beauty was evident and became an underground favorite. Now it’s getting an equally experimental and beautiful vinyl treatment as an RSD Exclusive release with just 4,500 copies coming out on clear vinyl.

What is supporting local businesses without supporting the local music scene? The Wrens, a band whose Garden State roots embodied who they were and what their legacy became, flew under the radar ever so slightly, yet broke through the mainstream enough for people to still be clamoring for their work (new and old). This RSD Exclusive drop is set to be the first widespread release of the band’s sophomore album on vinyl – two colored vinyl for a 2xLP, at that. 2,000 of these are on their way and seeking one or two copies out is just the proper way to show love and respect for our home state icons.

Never before on vinyl, Roy Buchanan’s mostly overlooked and borderline unknown first record is having a limited release of just 1,750 for this Black Friday. As an RSD First, the record is only seeing the light of day on deep orange and fiery red vinyl now, having a short CD release back in the early 2000s. If you’re a fan of the literal Fender bender and are ready to take home songs that were once scrapped prior to his early seventies breakthrough on physical, this is your chance. You can live out 13 early Buchanan hits on this and marvel at his skill on that damned guitar of his.

An RSD Exclusive 50 years in the making – Carole King’s live performance of Tapestry hits and more at the BBC in 1971 featuring James Taylor, “Will You Still Love Me Tomorrow,” and more. Is there anything else to say about this record other than it has never been produced on vinyl until today and there are only 6,550 about to be in existence and you need to get it?

This RSD First takes you back to 1964 with a family known less for its musical capabilities and more for its bizarrely comforting physical horrors and sitcom-esque camaraderie. As Record Store Day explains, At Home With The Munsters is a full-length LP, never before been printed on vinyl, that “features songs and story from the original cast of the beloved TV show.” A special edition pressed into blue vinyl? That’s right. A collectors item? Surely. A pop culture item only 3,000 people are going to get their hands on this Black Friday? Yes.

Smooth, light brown, almost mustard yellow vinyl is what this Ray Charles album is (finally) coming out on. It’s a timeless, muted color for an artist whose music is just as timeless, but far from muted. Charles’ jazzy art shapes generations to this day and we celebrate that often. Purchasing one of the 2,000 RSD Firsts of Live In Stockholm simply gives you all another chance to do so, but this time with a limited edition live show from 1972 in your hands. Nine songs from that decades-old performance grace this LP, including “Don’t Change On Me” and “I’ve Got A Woman,” which are sure to sound even more robust and meaningful popping and crackling away on your turntable.

2020 was the year of livestream productions, and regardless of the caliber or set-up, they were loved. Musicians and bands brought live music into people’s homes when it was easily accessible or even allowed. One of those bands were Modern English, a post-punk meets new wave style rock group who decided that instead of being downtrodden for no longer hitting the road, they would hit up a recording studio in London to perform live (minus an audience). Everyone who picks up After the Snow this week is the audience. 2,000 copies are coming out, so that’s equivalent to a theater show – which this RSD First lets you pretend you’re at! (At least, until Modern English actually go on tour in 2022.)

The full list of Black Friday Record Store Day releases, exclusives, editions and more can be found here – as well as the participating stores that need your support!