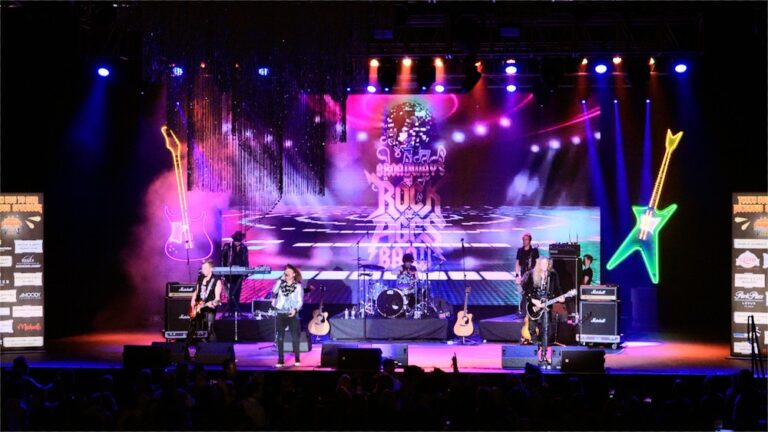 It’s not Rock of Ages… but it is. And it’s coming to the CartaretPAC.

Rock Of Ages opened on Broadway in 2009 and it didn’t take long for the show to become a worldwide phenomenon. It lasted until 2015, in the process becoming the 29th longest running show in Broadway history, garnering five Tony nominations along the way. It spawned three national tours, as well as productions in the U.K., Australia, Canada, and Manila. A major motion picture, starring Tom Cruise, Russell Brand, and Katherine Zeta-Jones, was also released, although the script was completely re-written and critics panned it as lacking the fun spontaneity of the Broadway production.

The show is based around hit “hair nation” songs of the 1980s, including songs by Bon Jovi, Poison, Whitesnake, Twisted Sister, Warrant, Styx, Pat Benatar, Joan Jett & The Blackhearts, Foreigner, Night Ranger, Journey, and others. But the ingenious way the music was woven into the plot, and the way it was done tongue-in-cheek, made the musical a hit even with theater goers who weren’t fans of the genre of music.

The backbone of the show was the all-star band, which was on stage for the entirety of the show and were also involved in some of the theatrics and choreography. However, this was far from the typical “Broadway band”… this was the greatest rock band ever assembled for a Broadway production. The musicians that performed in the show have also played in, and/or currently play with, platinum selling touring groups such as the aforementioned Whitesnake, Joan Jett, and Night Ranger, as well as Blondie, Trans-Siberien Orchestra, and Soul Asylum.

The stellar band occasionally ventures out and does concert performances, doing songs from the show, along with a few other eighties classics. They will be making a rare New Jersey appearance at the new Carteret Performing Arts Center in Carteret on January 15, in what is a must-see show for not only fans of the Broadway musical, but for fans of classic rock, as well.

As a special bonus for this show, it will mark the first time the original star of the Broadway show, Constantine Maroulis, will be reunited with the band. Constantine will be joined by Joel Hoekstra on guitar (Whitesnake, TSO), Tommy Kessler on guitar (Blondie), Winston Roye on bass (Soul Asylum), Richard Maheux on keyboards (Enrique Iglesias), and Jason Gianni on drums (TSO, Eric Martin of Mr. Big). Also joining the band on stage will be another star from the Broadway show, Josephine Rose Roberts.

Joel was not only the primary guitarist for the entire six year run of Rock Of Ages – he also had a cameo in the movie. Considered one of the premier guitarists in the world today, Joel was a part of the show from the beginning. “I was subbing on pit gigs on Broadway,” he recalls. “One of them was the show Tarzan. The keyboard player from that show, Ethan Popp, got hired as the music supervisor for Rock of Ages. He remembered me as being a rock guy and hit me up. By the time he contacted me I had already started playing with Night Ranger, so it made even more sense as their song was in the show.”

Joel soon became a prominent feature on the Broadway stage, with the show intro featuring a fan blowing back his hair while he shredded the opening solo. “Great fun,” he laughs. “And the end of the show was just playing out on the changes of ‘Don’t Stop Believing,’ so I quoted the melody, shredded a bit and then would roll on the floor like Angus Young and jump off the bar on the set to cue the final button. Absolutely ridiculous, but SO much fun. You only live once!”

Joel’s involvement actually led to Tommy Kessler becoming part of the group as well. “I was brought into the show when Joel got involved to play Guitar 1,” he says. “He needed a sub for the first show because he had a show with Night Ranger so I went through tech with him and did the first preview. One of the original guys from L.A., David Gibbs, was playing Guitar 2 for the first week or two so when he left, he asked if I wanted to take over Guitar 2. So that was how it all began for me just bouncing around between the two guitar chairs for the next couple thousand Rock Of Ages shows.”

The Broadway show, as with any theater production, uses medleys and snippets of songs to fit in with the dialogue, but the great thing about the concerts that Broadway’s Rock Of Ages Band perform is that it’s ball-to-the-wall, full versions of the songs in their original form.

“There are two varied types of musical production aspects to these shows,” relates Jason Gianni, drummer for the band, who not only filled in on Broadway but also did some of the touring productions. “I’ve always been very influenced by and loved Pyromania from Def Leppard, so ending the whole live show with the title song ‘Rock of Ages’ as a big encore is always a big highlight.”

The live energy of the music is also a highlight for Josephine Rose Roberts, who portrayed Regina in the Broadway production. “I love ‘Final Countdown.’ Everyone groans when I say that, but that song always gets me going. It was a fantastic way to open the second act of the show. Also, ‘We’re Not Gonna Take it.’ I mean, that’s just my personal, everyday life motto,” she says with a laugh.

Josey, as her friends affectionately call her, has been involved in Rock Of Ages for a long run. “In 2009, I was out in LA doing a show and ROA was holding auditions for a sit down production in Toronto. I was cast as Regina and about a month after we opened, I was transferred to Broadway. I stayed with the Broadway production for almost five years! For the longest time, people thought I was Canadian or that I was from L.A., but NYC was home and I was so grateful to be back home and back on Broadway.”

The group’s members all keep busy with various musical endeavors. Joel is currently on tour with TSO and he recently released Joel Hoekstra’s 13. “It’s my ‘rock’ side project,” he explains. “It sounds very much like a band, but the hitch is that I do all of the writing, so I think of it as a project. I describe the music as Dio-ish at its heaviest and Foreigner-ish at its lightest.” The album includes some real legends of the hard rock world, including Russell Allen, Vinny Appice, Tony Franklin, Derek Sherinian, and Jeff Scott Soto.

Jason teaches drums at two prestigious music schools, the Collective School of Music and The New School, and can often be found manning the drum stool for Little Shop of Horrors on Broadway and for Mark Wood, the original violinist from the Trans-Siberian Orchestra.

Josey is back on stage with Nickel Mines, a show based on the 2006 Nickel Mines school shooting that occurred in Lancaster County, Pennsylvania. “It’s a non-traditional musical,” she says. “We were on our first day of tech when the pandemic shut us down so I’m happy we get a chance to remount the production. This show is very close to my heart and it has an incredibly powerful message.”

Constantine released a new album of his own last year, the critically acclaimed Until I’m Wanted, and keeps up a busy touring schedule. But he’s especially excited to get back on stage with his former Rock Of Ages cohorts. “There was an unmatched magic that we created on stage every night in the original company of Rock of Ages,” he says. “Sure, it’s been done all over the world thousands of times over and in dozens of different languages ever since, but nothing will match what we did in the original company. Getting a chance to join the boys again is truly such a privilege and an opportunity for audiences to experience the magic yet again in concert form.”

The concert promises to be a true extravaganza for rockers from any era, but especially for those who favor the memorable eighties classics, played by some of the most preeminent musicians touring today. “Any chance to perform with these talented artists again on stage is as an opportunity I cherish,” Constantine adds.

“What we do in this concert celebration is, in addition, include some of the material originally intended for the show that didn’t make it into the actual musical. And I think that’s what will be particularly thrilling for audiences that know the show very well! From Guns ‘N Roses to Def Leppard, it is guaranteed to melt your face off.”

BROADWAY’S ROCK OF AGES BAND APPEARS JANUARY 15 AT THE CARTERET PERFORMING ARTS CENTER! FOR MORE INFORMATION, CHECK OUT THE VENUE’S WEBSITE OR THE BAND’S FACEBOOK PAGE!