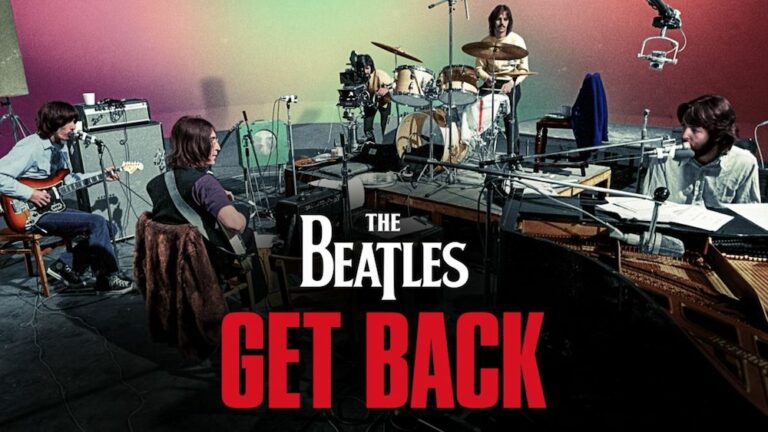 Tomorrow marks two months since we will have had the most insight into the inner-workings of The Beatles since… well, ever. Let’s look back at Get Back.

November 25 to January 25 – it been just about two months since The Beatles: Get Back was first released on Disney+. The three-part “documentary within a documentary” is as compelling as it is long. Each episode runs two to three hours and roughly covers one week. If you have a busy schedule, it may be almost impossible to binge watch. The great thing about streaming is that you can start and stop at your leisure. One thing is certain – it’s mandatory viewing for every melophile, as well as anyone interested in human behavior.

I want to give kudos to Peter Jackson. Not only did he undertake the lofty task of sorting through more than 55 hours of audio and visual material; he provided the opportunity for us to witness something special. “In many respects, Michael Lindsay-Hogg’s remarkable footage captured multiple storylines. The story of friends and of individuals. It is the story of human frailties and of a divine partnership,” Jackson said in a statement. “It is a detailed account of the creative process, with the crafting of iconic songs under pressure, set amid the social climate of early 1969. But it’s not nostalgia – it’s raw, honest, and human. Over six hours, you’ll get to know The Beatles with an intimacy that you never thought possible.” He continued, “I’m very grateful to The Beatles, Apple Corps, and Disney for allowing me to present this story in exactly the way it should be told. I’ve been immersed in this project for nearly three years, and I’m very excited that audiences around the world will finally be able to see it.”

What I will attempt to do is provide a brief summary of each segment and select a few moments that stood out. I may or may not skip around. These are broad observations, so watch in its entirety for an accurate timeline.

“Part 1: Days 1-7” – The Fab Four ‘come together’ at Twickenham Studios to rehearse for what is supposed to be a television special documenting the making of their next album, Let It Be. This is supposed to end with a live show at a location to be determined (the sites are way over the top- think the Parthenon or the Great Sphinx of Giza) and Michael Lindsay-Hogg is there to record it all. He has microphones and cameras set up in every nook and cranny. John [Lennon] and Paul [McCarney] bring Yoko [Ono] and Linda [McCartney]. Yoko and Linda spend most of the time reading, knitting, or quietly conversing with each other. George [Harrison] brings a Hare Krishna friend who sits on the floor across the room. Two of them appear the following day. I was afraid they would keep multiplying and go to the airport to recruit more followers. Thankfully, that didn’t happen. They were unobtrusive, but unsettling. Ringo [Starr] arrives with a chill attitude and his wit. Collectively, they present ideas. It’s captivating to see the inception of such quintessential songs. However, some are brought to the forefront and others seem to slip through the cracks. The latter resulting with George feeling dejected. Ultimately, he makes a decision that could cause the implosion of this project and even The Beatles as a whole. The remaining three visit George at his estate to hash things out, but it doesn’t go well. Favorite Moment: “Maxwell’s Silver Hammer” featuring Lindsay-Hogg’s debut on the anvil.

“Part 2: Days 8–16” – With the uncertainty of the band’s future, Ringo arrives and is greeted by a bouquet of flowers sent by the Hare Krishna. Paul arrives shortly after, but John is nowhere to be found. After multiple phone calls, John finally makes it in. The three rehearse without George. Paul and John have a private conversation over lunch that is recorded without their knowledge. John suggests another huddle with George. Peter Sellers visits the set for a short time. Paul continues to hone “Get Back.” Ringo and Paul play a spirited number on the piano. The meeting with George is positive and constructive. They agree on moving rehearsals and recording to their Apple Corps studio and abandoning the live TV concert. Rehearsals begin with the band intact. It’s the most light-hearted and collaborative day since the start. Filming continues and they ponder an outdoor concert for a feature film. The band is eager to start recording, but the team isn’t quite ready. When things start rolling in that respect, the magic really starts happening. Billy Preston drops by the studio to say hello, as he’s in London. By divine intervention, he is compelled to sit-in with them on electric piano for the duration. His appearance is the sunshine everyone watching The Beatles: Get Back needs. John declares,”You’re in the band!” and rightfully so. A bit later, John. Paul, Billy, and Yoko do a fun freakout. A location for the outdoor concert is proposed and it’s way more convenient. There are concerns about noise ordinances and the weight of equipment. Be that as it may, this portion ends with the decision to perform on Apple Corps’ rooftop. As an added bonus, Part 2 includes exclusive content of their trip to India. Favorite Moment: Two Beatlemaniacs are interviewed outside, while band members sneak by without detection.

“Part 3: Days 17–22″ – The Beatles continue recording as the deadline for completion draws near. Ringo impresses with a run-through of “Octopus’s Garden.” Heather McCartney makes an appearance with her joining Ringo at the drum set and impersonating Yoko. John remarks that “The Long And Winding Road” is going to be a hit and George presents a “happy rocker.” Billy Preston maintains the soul. The viewer sees Alan Parsons for the first time. The legendary artist and studio guru is working as a tape operator for this project. Inclement weather delays the concert another day. Ringo announces that he farted. Mike McCartney makes an appearance wearing a very shiny, brown jacket. George contemplates a solo album. The day of the rooftop concert arrives. Ten cameras chronicle the event. As The Beatles start playing, there is confusion on the streets. However, it changes to the delight for many and the dismay for a few party poopers. Two coppers demand they stop, but are stalled from reaching the top by clever staffers. Eventually, they are led to the final destination by Lindsay-Hogg. More officers arrive and the concert is halted. The group decides to meet for one more session the following day after listening to playbacks. The mood in the control room is optimistic. Favorite Moment: The entire rooftop concert. The credits roll, but stick with them. Trust me on this one.

I was delighted by the end product and I’m sure you’ll concur. I cherished every minute, especially the goofing off that resulted in fun takes on tracks made famous by them on earlier albums and by other artists. My disclaimer? Many cigarettes were smoked and many cuppas were consumed in the making of this film. Was it worth every one of them? Hell yeah!

MORE INFORMATION ON THE BEATLES: GET BACK – ROOFTOP CONCERT CAN BE FOUND HERE!