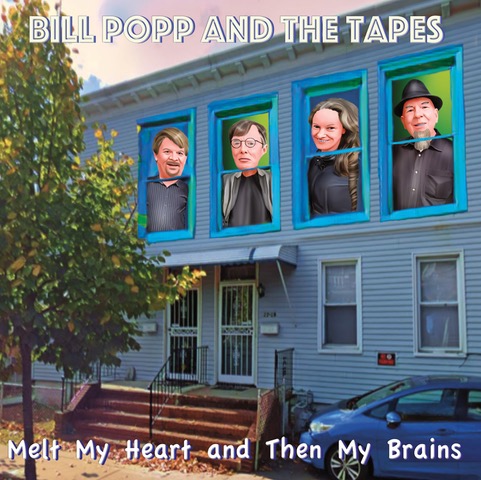 New EP Brings Us Back to Bill

Local legend and music veteran Bill Popp is serving up some fresh pop rock tracks, so take a seat at the table and get ready to enjoy.

Bill Popp is no stranger to releasing music and putting on live shows – he’s practically an expert on such after four plus decades in the industry. Whether it’s Bill Popp’s solo jaunts or group endeavors with The Tapes, he knows what he is doing.

He proves that as the vocalist, keyboardist, and percussionist for this forthcoming EP, Melt My Heart And Then My Brains. It’s a fun set of five songs that include a particularly shiny bass (played by Mary Noecker) and a new kind of nostalgia. This is the first EP release from Bill Popp and the Tapes in seven years; time that included the pandemic, which notably halted a fair amount of socialization and a majority of the music scene for quite some time. Popp has put a lot of mileage on his career, creating a discography that fits ‘the now’ and echoes the sights and sounds of the Big Apple.

“My Little World” kickstarts the EP with a tambourine in hand. Akin to The Beatles in musicality and Bruce Springsteen in vocals and narrative, Popp and his band introduce Melt My Heart And Then My Brains in a singer-songwriter way, but never straying too far from the alternative pop roots he has laid down for himself. Only a handful of verses wiggle around the groovy instrumentation, but it works all too well.

Following it up is a song called “Claim On Your Love,” which could be the soundtrack to a walk in Central Park after a marvelous first date because it highlights connection with a ballad backbone. It’s a sweet album highlight from top to bottom. “Tucker James” saunters in, juicy and jive-tinged, waiting to be danced to. The story in the lyrics is hard to follow at times, but there is a captivating series of moments and feelings worth noting.

Track four, “Sucker For A Pretty Face,” is sure to become a opening number for one of Bill Popp’s infamous shows. Whether a bar stage or a legitimate club, the drums that begin this song are ready to reverberate off any and all walls that encase it. This is another song that we can picture in a television show or movie… and not because he uses the word movie in one of the lines. There is yearning and honesty of the boy-likes-girl-girl-likes-boy trope, ready for main characters to relate to on a big screen. Lighthearted regrets and giddiness are happening all at once here, too, and in such a melodic pop rock way that is reminds specifically of the early days of Badfinger.

Rounding out this new Bill Popp and The Tapes EP is “Irish Whiskey Bar,” which, again, is a city song. Based off his own time in Astoria, Queens bars and the local scene, the late night rush, and the camaraderie of being a frequent guest at these sort of establishments, you feel the song right to your core. Much like a shot of bourbon, it warms your core and brings you back in time. For Popp, it’s friendly neighborhood moments like bar bands, dart games, and, appropriately, drinking. The song could have easily been written and recorded in the 1970s, emulating the nonchalant lifestyle and underrated simplicity that hanging out with your buddies at the end of the day can bring. An edgy, but cool reality and a fondness felt in Bill Popp’s seasoned voice. It is ready to be experienced live in that exact setting, too, and luckily you can!

On February 21 at 7:00pm EST in Astoria, Queens, Bill Popp and The Tapes will be celebrating this EP release and performing. This is located at The Irish Whiskey Bar, will feature a surprise guest, and is open to the public. Make your plans now… and don’t forget this review when you hear these songs live for the very first time on release day!

FOR MORE INFO ON THE SHOW, EP, AND ALL THINGS BILL POPP, CLICK HERE!