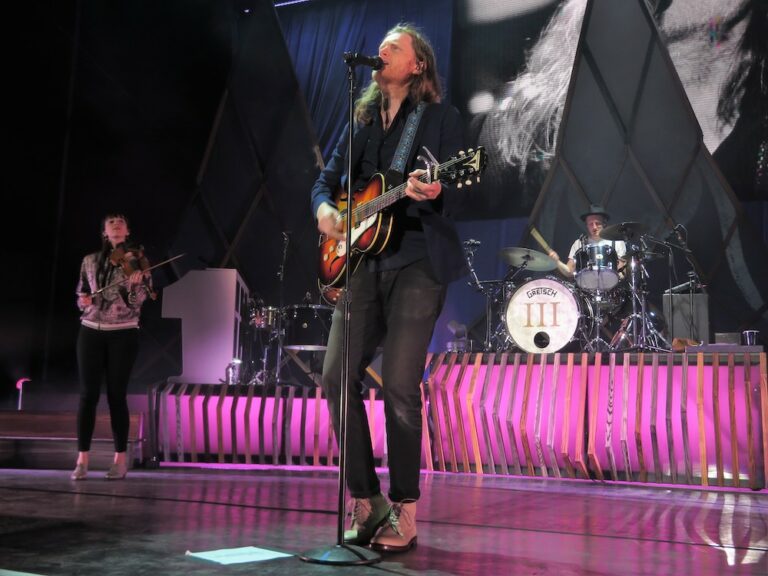 The Lumineers announced on February 8 the North American dates of the Brightside World Tour 2022. The shows begin May 18 and continue through early September, including local performances at PNC Bank Arts Center on May 28 and Forest Hills Stadium on June 17. Caamp will be the support act at all the local shows. After successfully creating the world’s first major climate positive tour in 2020, The Lumineers will continue a partnership with environmental non-profit REVERB.org on this year’s tour. The band has committed to a comprehensive climate action program via REVERB’s Music Climate Revolution campaign, which, in addition to reducing the tour’s environmental footprint and engaging fans to take action at the shows, will support projects that directly and measurably eliminate greenhouse gases while benefitting diverse global communities. These efforts will make the tour climate positive; eliminating significantly more greenhouse gas pollution than the tour emits, including fan travel to and from shows.

Wilco will celebrate the 20th anniversary of its fourth studio album, Yankee Hotel Foxtrot, by performing the album in its entirety in four concerts at the United Palace on April 15, 16, 17, and 19. The band also will perform a mix of concert favorites and rarities. Yankee Hotel Foxtrot will be re-released later this year.

Fleet Foxes announced on February 9 a run of 35 headlining tour dates in support of the 2020 album Shore. The tour will take Fleet Foxes through North America, the U.K. and Europe beginning June 27, and will include a date at Forest Hills Stadium on August 13. The live band will feature Robin Pecknold joined by four multi-instrumentalists, Skyler Skjelset, Casey Wescott, Christian Wargo, and Morgan Henderson.

Idles has added U.S. dates to an international tour that begins in Wales on February 18 and ends in Australia on November 8. The new shows include a headlining performance at the Kings Theatre on September 15.

Father John Misty will celebrate the release of Chloë and the Next 20th Century on April 14 with a pair of intimate performances at the Rainbow Room at 7 and 9:30 p.m. Entry to the show is free with the pre-purchase of a signed LP edition of Chloë and the Next 20th Century, available for $32.98 on a first-come-first served basis from Rough Trade’s online store. Pre-purchase of the record confirms an RSVP to the show. Up to two records may be pre-purchased per person for redemption of two passes to the show.

Sunflower Bean announced on February 8 that it will extend its previously announced tour of the United States and the United Kingdom that originally ran from February 24 to April 11. The new North American dates will begin on April 29 and run through June 11, and include dates at Asbury Lanes on May 6 and Webster Hall on May 12. The tour will promote the band’s third studio album, Headful of Sugar, which will be released on May 6.

Melissa Etheridge will continue her Friday night podcasts through the end of February, then begin an international tour on March 16 to promote her One Way Out album. Area shows include the St. George Theatre on June 10, the Tarrytown Music Hall on June 12, the Count Basie Center for the Arts on June 13, and the Mayo Performing Arts Center on June 14. Etheridge also will perform her One Woman Band show at City Winery NYC on May 30 and 31 and June 2 and 3.

Destruction will celebrate its 40th anniversary with a new album, Diabolical, on April 8, followed by a spring tour with Nervosa, Sunlord and VX36. The month-long tour will begin on April 28 at Elsewhere in Brooklyn. “Yes – we are super thrilled: the first tour of the new record, Diabolical, will kick off in North America!” said Destruction’s vocalist/bassist Schmier. “We could not tour there on the last album because of the pandemic, so we made it a top priority to return as soon as the circumstances would allow us, to play for our American fans again!”

The Pretty Reckless announced on February 7 the postponement of its two New York City concerts. According to the band’s social media, “Due to unforeseen circumstances, our shows scheduled for this March at Brooklyn Made have been moved to May 17 and 18. March 22 tickets will be honored at the May 17 performance while any tickets for March 23 will be valid for May 18. See you in May!”