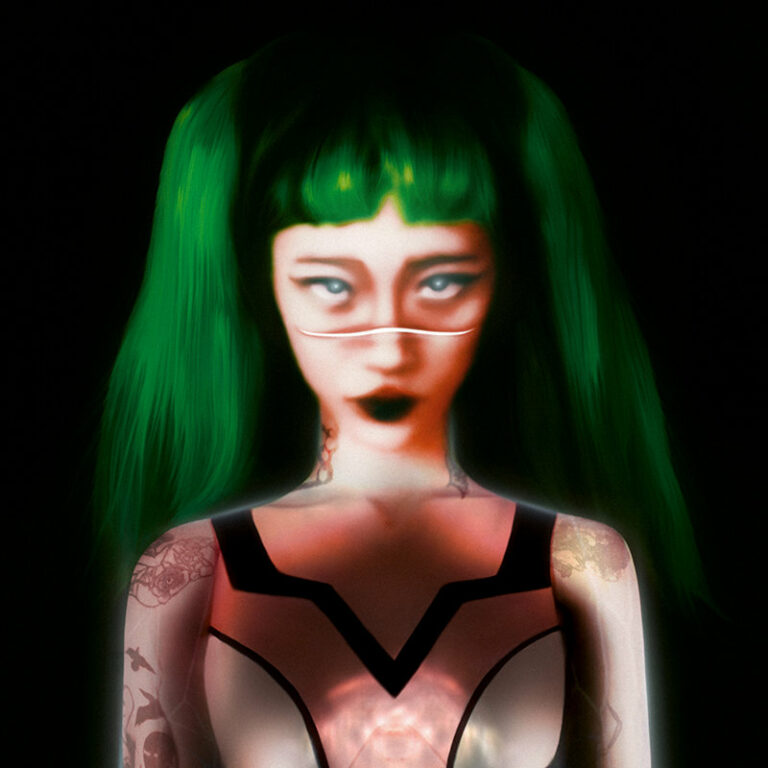 In a glitchy transcendence to the ethereal realm, Yeule creates a cyber-gothic atmosphere that explores reality, imperfection, and body.

Glitch Princess is the second full-length project from the non-binary, 24-year-old London-based, Singapore-born artist, Nat Ćmiel. Since 2014, Ćmiel has been releasing computerized ethereal pop music under the Yeule moniker, with Serotonin II as their first album in 2019. On this 2022 release, they’ve become even more explorative than their last outing, and although the album is full of glitchy computerized textures, this is Yeule’s most human record.

Atop a humming noise akin to a computer fan running and sporadic synths, Yeule gives a cybernetically defective spoken word introduction on the opening track “My Name is Nat Ćmiel’.” You feel as though you’re traveling through a cyber-dimensionsional wasteland, discovering a malfunctioning cyborg repeating a message ad-eternum.

Lyrics such as “I like to dress up and not going out. I like my cat, Miso. I like touching myself. And I like being far away from my body.,” makes Glitch Princess intense and uncomfortable, and also meditative. The sonic wash of “Fragments” acts as an elevator to the next dimension with Yeule’s voice crackling with reassurance until the song is overcome with the screams of ones and zeroes. There are gorgeously crafted pop moments on the record such as the jungle trance beats in “Too Dead Inside” and the pulsating hyperpop explosions on “Bites on My Neck.”

It’s difficult to write about what flaws us as humans, to craft it into something meaningful and tasteful. Topics of body image, eating disorders, and drug addiction are so viscerally and gracefully approached by Yeule. “Perfect Blue,” featuring Japanese hip-hop artist Tohji, sheds light on obsessive qualities, how we perceive our bodies and shape them to match something glorified. “Didn’t fit the shapes you cut / Made me want to stab my gut.”

“Friendly Machine” is a graphic track exploring pervasive thoughts of death, putting into words these dooming feelings. Meanwhile the outro track “Mandy” is a dialogue between the singer and a drug induced personification – one that absolutely rips reality in half with shoutings of “MANDY!” and shearing malfunctioning textures.

Glitch Princess is a beautiful album; glorious at times because of Yeule’s ability to be so open and honest about what flaws us as people. The guitar driven “Don’t Be So Hard on Your Own Beauty” buries itself in the middle of the record track list as a sort of sweet respite from the rest of the digital tracks. It’s all acoustic guitar with the occasional high pitched melodic percussion and Ćmiel’s vocal layering underneath a flow of singing akin to a journal entry. It doesn’t strongly feature the digital timbre from the rest of the album, but it carries the mission of Glitch Princess.

There’s a spiraling nightmare of self destruction going on for the singer, yet they have this supportive entity reassuring them to not to be so hard on themself. “You let me cry and wipe my eyes,” Yeule sings. “And make me feel something other than desolated nothing.”

GLITCH PRINCESS, THE SOPHOMORE RELEASE FROM YEULE, IS OUT NOW!