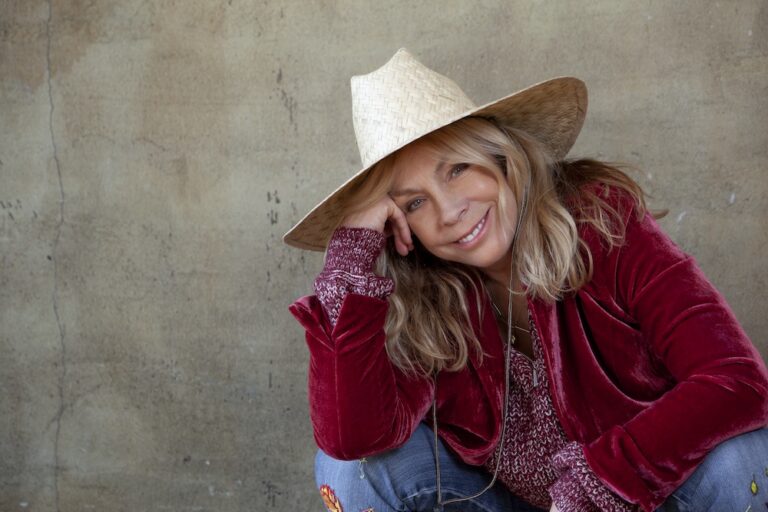 Rickie Lee Jones, 67, has been on the road for over 40 years, even before her 1979 eponymous debut which contained “Chuck E’s In Love” (No. 4 on the Billboard Top 10). Some 19 albums later, she’s as comfortable onstage as she presumably is in her living room. With no opening act, and a stage beset with drums, xylophone, piano, bass and organ. She sashayed to the foreground.

“I don’t want to see any of you chewing,” she warned as waitresses served hamburgers. She chastised her band for dragging the tempo, complained about the microphone, and told a long story of the fear at the heart of stage fright.

“I’ve been afraid of you for years,” she told us on the Bethlehem, PA stage. “Until I learned how not to be. Artists only get stage fright because they’re afraid they won’t be loved. I told Carly Simon to relax. `They paid to see you, paid a baby sitter, drove long distances, they love you just walking in the venue. You only have to do one thing:  love ‘em back!’”

She unstrapped her acoustic, stood there, and told us about the sexual abstinence she endured for so long after separating from her husband in the nineties. Then she did another song from that landmark debut, “Company,” driving herself to the point of crying onstage. But she liked not having the encumbrance of an instrument and got musically frisky, wanting to sing from songs from The Great American Songbook, none of which her band knew so she retired to the piano where she performed the highlight of the night.

“Up On The Roof” was written in that hit factory called The Brill Building on 1619 Broadway in New York City by Gerry Goffin and Carole King in 1962 with an inherent and palpable yearning at its core. First recorded by The Drifters and subsequently covered in notable versions by Laura Nyro (1970), Carole King herself (1971), Ike & Tina Turner (1973), James Taylor (1979), Neil Diamond (1993), and many others (Springsteen even performed it every night on his Born To Run tour in 1975), no one, but no one, sang it like Rickie Lee Jones did on this stage on this night, March 15. She stretched out the syllables of every word, whispered the chorus, made us feel the sanctity of that rooftop like never before. The band didn’t know whether to play or not. They could only stand there at their stations dumbfounded as this woman became a conduit for the kind of heartbreak she’s been dishing out in various forms her whole career.

This magic moment spiritually superceded everything else. She wound up playing for over two hours. The Lehigh Valley crowd loved her, frequently yelling such from their seats. The sound system was perfect. The drinks were strong. The backdrop to the stage was magnificent and she commented (as most artists do) at the gorgeous setting. Those who have not been to this easily accessible venue (about an hour from North Jersey) would do themselves well to visit. Behind the stage is a wall of glass so one could look out at the hulking remains of Bethlehem Steel, its blast furnaces lit up like an art-deco sculpture.