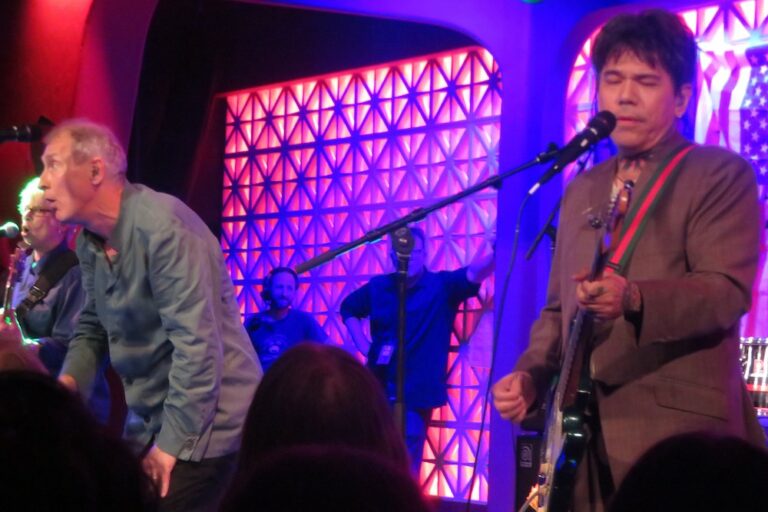 Gang of Four returned to New York with a completely different line-up from the last time the band toured America. Three years ago, the British post-punk band was led by founding guitarist Andy Gill with three 21st century replacement musicians. Gill died in 2020. This year’s rebranded model features founding vocalist Jon King, returning after a 10-year hiatus, founding drummer Hugo Burnham, returning for the first time since 2006, bassist Sara Lee, who played in the band from 1980 to 1984, and a new addition, American guitarist David Pajo, who in recent years has been a touring member of the Yeah Yeah Yeahs and Interpol.

When the original Gang of Four formed in 1976 in Leeds, England, the band was among the leaders of the first wave of punk rock. The outspoken quartet challenged the status quo with sarcastic, political and otherwise controversial lyrics that led the United Kingdom’s television and radio empires to ban several songs. The current tour, billed as the ’77-’83 Tour, would feature all those banned songs and more. The tour would celebrate and promote Gang of Four’s most recent product, last year’s Grammy-nominated Gang of Four: 77-81 box set.

Although the tour was supposed to present a panorama of Gang of Four’s earliest years, the band did sneak in one later song, “I Parade Myself,” from the 1995 Shrinkwrapped album. Otherwise, the repertoire remained true to what a set list might have been in 1983. This included an old tradition, King rhythmically pulverizing a microwave with a bat during “He’d Send in the Army.” After almost 40 years away, Lee was back singing “I Love a Man in a Uniform.” On that song and on “We Live as We Dream, Alone,” two additional vocalists joined Gang of Four onstage. The drummer’s daughter, Tess Burnham, and Dolette McDonald, who also has provided background vocals for Talking Heads, the Police, the Rolling Stones, Steve Winwood, Don Henley and more, supplied the background vocals.

At Brooklyn Made, Gang of Four remained true to its original sparse sound, featuring driving guitar leads backed by a strirring groove. The highly animated King was in a frenetic fervor the entire set, stimulating the audience with his energetic moves, periodically standing at the rim of the stage to engage his fans. With no rhythm guitar, keyboards or other instruments to fill the sound, Lee and Nurnham often laid a stark groove to which Pajo then charged in with sharp riffs and leads. Imitating Gill’s style, Pajo’s leads were sometimes a few extended notes given a bit of feedback. As such, King sang to a crisp backdrop that sounded strikingly bare and primitive. At times, one might have detected parallels to the music of Talking Heads and Bush Tetras, but Gang of Four ably demonstrated that it is and has always been a rather unique rock band.

Gang of Four has an unenviable reputation for splitting and reuniting five times in its 46-year history. Hopefully this time the quartet will do rock fans a favor and stay active for a while. Ideally, the revamped group will stay together long enough to write and record new music.