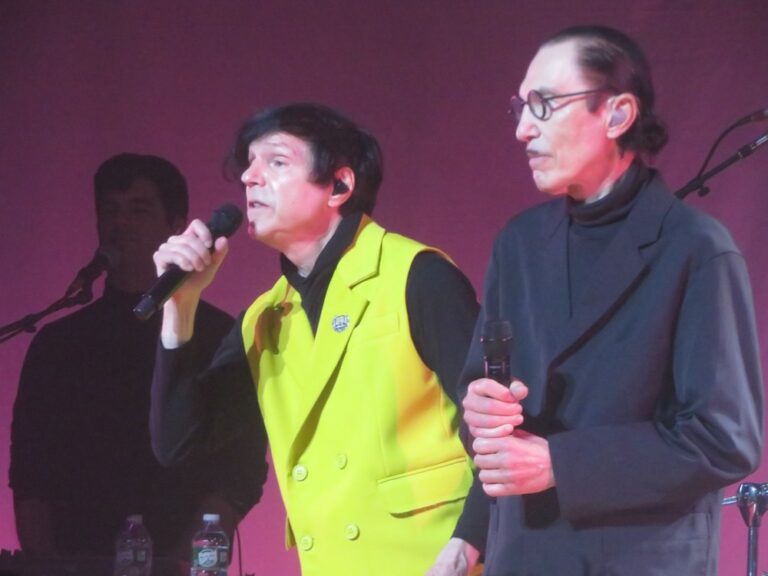 Sparks has released 24 studio albums since forming as a quirky pop duo in 1972 in Los Angeles, California, yet the band has found little more than a cult following in their native land. Led by two brothers, vocalist Russell Mael and keyboardist Ron Mael, Sparks is better known in Great Britain, Europe, Japan, and Australia. Sparks does not play New York City often, so the band’s two nights at the Town Hall brought out the hardcore and long-deprived fans.

Sparks’ current tour is the first since the release last year of two film projects, a biographical documentary entitled The Sparks Brothers and a musical film, Annette, which the Mael brothers wrote the screenplay and also performed the soundtrack. The concert at the Town Hall began with the opening track from Annette, “So May We Start.” As Russell engaged the audience by cavorting all over the stage, Ron sat typically stoically at his keyboard. Like much of Sparks’ music, the song was not particularly a rocker, but more like theater music.

Drawing 23 songs from 12 albums allowed Sparks the bandwidth to feature styles from across five decades and all the duo’s creative periods – pop, glam rock, art rock, disco, electronica, and ambient film scores. The repertoire included many fan favorites as well as deep cuts. Perhaps the deepest cut was “Wonder Girl,” originally recorded under the name Halfnelson, before the Maels changed their stage name to Sparks. “Johnny Delusional,” recorded in 2015 with Scotland’s Franz Ferdinand as a short-lived supergroup FFS, was another surprise choice. Fans did not get “Amateur Hour,” “Dick Around,” and “Something for the Girl with Everything,” however.

The two-hour set showcased the odd way that the Mael brothers arranged their compositions. Backed by a back row of four additional musicians (a fifth, guitarist Kevin Weiss, tested positive for COVID and could not perform), songs would dive into a groove and then suddenly change rhythms and/or Russell would scale his vocals to the falsetto range. The accompaniment alternated between traditional pop to synthwave to a more classical bent or even what could be described as circus music. The lyrics were sometimes cleverly irreverent and sometimes overly simplified – it was impossible not to know the title of the song “My Baby’s Taking Me Home” since that line was repeated seemingly 100 times.

Rather than simply playing the songs, the Maels entertained. Russell engaged the audience by moving all over the stage as he sang and sharing brief anecdotes between the songs. Ron spoke little and stayed at his keyboard for most of the show. During “Shopping Mall of Love,” Ron moved to center stage beside his younger brother for his spoken word segment, much of which was simply the word “yeah.” On “The Number One Song in Heaven,” Ron rose from his keyboard, removed his jacket, again walked beside his younger brother and suddenly broke into wild dance.

Several times, Russell spoke words of appreciation in response to the audience’s enthusiastic cheers. For the Mael brothers and for the audience, the show crowned 50 years of original and very innovative Sparks music. Sparks may not be known to much of the music world, but concerts like this secure these core fans for a lifetime.