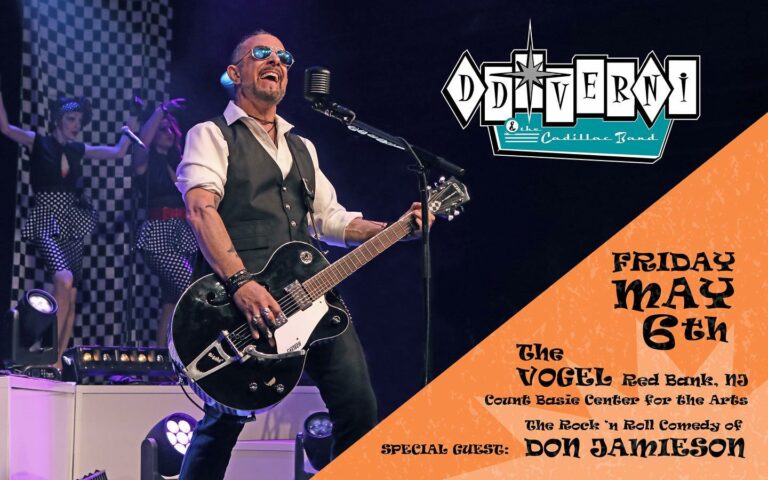 Via DD Verni and the Cadillac Band on Facebook

Spotlight: DD Verni & the Cadillac Band To Rip Into The Vogel

New Jersey never has a dull moment – whether that’s due to the big personalities, immense talent, good food, or proximity to the Big Apple, we’re grateful for it. We have more than a handful of entertainment venues to catch live music and experience the aforementioned talent that our locals have, share, ad enjoy. One of them is Red Banks’ Vogel, a space within Count Basie’s Center for the Arts. Taking their stage this week is DD Verni and the Cadillac Band, a riveting rock outfit fronted by OVERKILL’s beloved bassist, D.D., whose metal origins will never be a ‘thing of the past,’ but sure do get pushed aside when he’s with the Cadillac Band. (He maintains that musicality, though, and that rhythm that pulses through all he does.)

Fans are bouncing and jiving whenever in the presence of DD Verni and the Cadillac Band, so attending a live show of theirs is imperative for those craving a genuine Big Band experience. They tell stories, they swing, and they set their sights on bringing a bold sound to the table. All you have to do is take a listen to “That’s Life” to see what we mean and get on the bandwagon. This group is original and passionate, effortlessly layering instrumentation and jamming just as much with each other as they are the fans.

DD Verni and the Cadillac Band’s debut album released this past fall and included on of their best songs to date – a number you can’t help but groove to. “Olivia… That’s Who!” is outstanding and fun, loud and fulfilling, complemented by a hand-sketched, animated video. We are certain that it’s enough to sing, dance, swing, and rock out, but in the slim chance it’s not, you should go see them play live. That is the pinnacle of D.D.’s side gig, this band, and the music that is being offered. They are playing The Vogel at Count Basie Center for the Arts on Friday, May 6. For tickets and information, click here. It’s a Mother’s Day Weekend treat, so act fast!