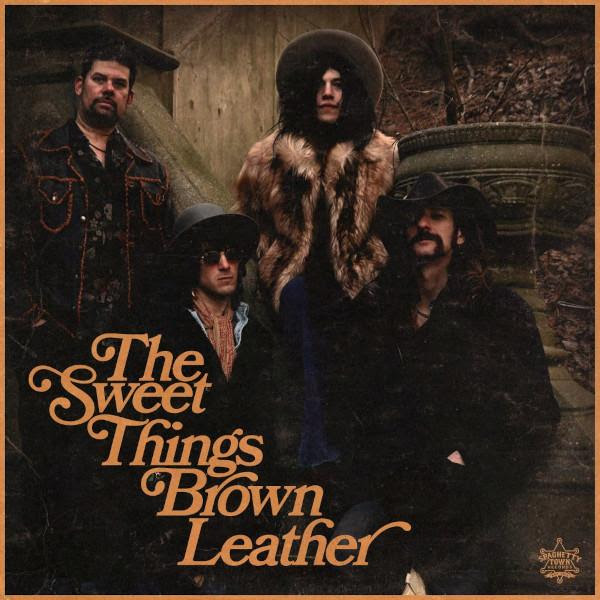 A weekend of quality time with good friends and quality music from a great band? We needed this.

When I was in my early twenties, I opened a closet door in my home and found a brown leather jacket. My mom wore it on her outings which were few and far between as a single parent. It was retro and looked great on me, so I replaced a button and made it my own. The Sweet Things does something similar with their new album by taking the familiar emotions of Southern rock, honky-tonk, and country, adding a bit of spitfire, and a few shots of whiskey. Brown Leather is the end result.

The quartet from New York City made up of founding members Dave Tierney (lead vocals/rhythm guitar) and Sam Hariss (bass/vocals) along with two new members Tobin Dale (guitar and vocals), and Hector Lopez (drums). They hightailed it down to Muscle Shoals, Alabama to record at the iconic FAME Recording Studios. They added finishing touches at Flux Studios and Mercy Sound in NYC with a slew of guest musicians including Aquarian Weekly favorite Rob Clores (Split Second Meltdown/Little Steven and the Disciples of Soul/Black Crowes) on piano and organ.

The first single and raucous title track, “Brown Leather,” gets everything rolling. The barnburner is accompanied by an action-packed music video with female empowerment and fun. About the video, Tierney said in a press release how much they love it. “It’s fun to watch it now after months of it just being an idea we had dreamed up. We had a lot of shows canceled in the Spring/Summer of 2019 (as did just about everyone), and now we’re finally relaunching ourselves as a full live band getting back on the road. “

“It seems appropriate to kick that all off with a video centered around a live performance like this one. This video is very optimistic, it’s the world in which we want to live. Hopefully, we play lots of shows where brawls break out if anyone dares to show up not wearing roller skates.”

“Ya Know I Don’t Mind” is soaked with Jack Daniels, catchy hooks, and heart to boot. “Ride It Home” teems with reckless abandon and my personal pick to be played on repeat. “Keep On Movin’” sounds like the love child of The Allman Brothers Band and Faces. “Ain’t Got Enough Room (In My Heart)” is one of those tunes I can imagine being in the scene of a movie where the lead has their heart broken.

The sixth track, “Cold Feet,” is perfect for a night out dancing and singing along with friends at your local watering hole. On the other hand, “Familiar Face” is the “last-call for alcohol” ditty with wit and a groovy guitar solo. If you want soul, look no further than “It Hurts Me Too” – what a blast!  The harmonica, gritty vocals, and glorious backup singers are three of the many reasons to get this record. The rowdy “Mentholated Blues” ramps up the speed. “Problematic Life” is a philosophical ballad. It’s insightful without being depressing if that makes sense. The most stripped down of the bunch, “Ride The River,” closes out with a beautiful instrumental that can easily be used in one of those “Slow TV” train journeys.

Brown Leather is pure perfection from start to finish. There are no duds or fillers. It will most likely earn a spot on my Best of 2022 list. Give it a listen or three and I think you’ll agree. Now, I just need to buy some cowboy boots and dust off that jacket.

BROWN LEATHER, SWEET THINGS’ BRAND NEW RECORD, IS AVAILABLE NOW! KEEP UP WITH THE BAND BY CHECKING OUT THEIR FACEBOOK PAGE!