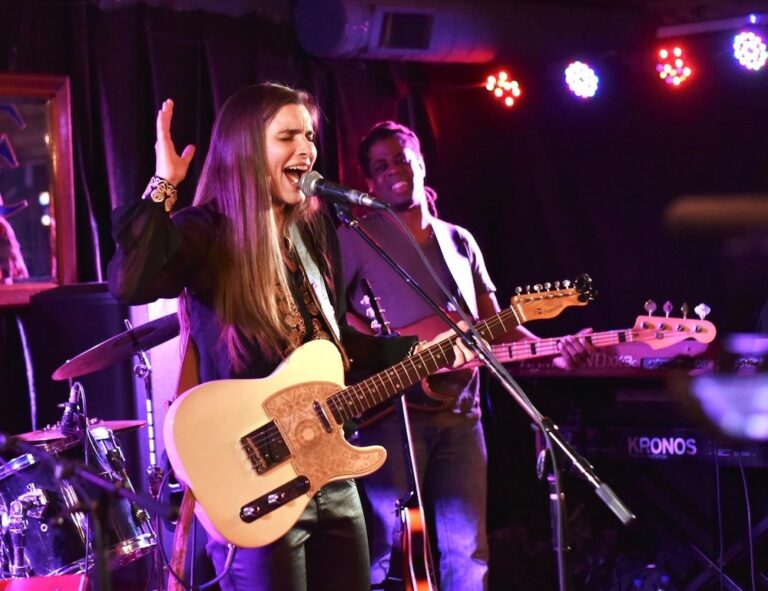 Makin Waves with Katie Henry: On Her Way

Bluesy North Jersey roots-rocker Katie Henry had amazing run with her 2019 debut LP, High Road, winning Makin Wave Female Artist of the Year, four Independent Blues Award nominations, plus a Blues Blast Music Award nom. But with this year’s follow-up, On My Way, her debut for the German blues indie Ruf Records, she has blasted past that success with an international fervor, touring Europe for the first time upon the January release of the Billboard blues-charting LP with plans to return in the fall.

In the following interview, I chatted with Katie about her new label home, her longtime collaboration with bassist and co-writer Antar Goodwin, and the many highs of burgeoning success.

You certainly are living up to the title of your new album, On My Way, by touring internationally in support of it? What have been the most enjoyable moments of your ongoing tour?

Thank you. It has been such a thrill to put new music out into the world and to tour internationally. Playing in Germany was a huge highlight because I have always wanted to play there, and it was really special to share the excitement with my proud 93-year-old German grandmother. Vienna, Austria was another favorite spot. It is so beautiful there, and I definitely want to go back! The shows have been a lot of fun, and my favorite part is being backstage and hearing cheers for an encore. Like the crowd, I’m always ready for more!

How has your team evolved since High Road and how have they helped to develop your career?

My team has greatly evolved since High Road, and it’s been nice to have others on board pursuing a common goal. Working with the Ruf Records team has been a big step because they are like a big amplifier that helps to get the word out. Michelle does an amazing job at working the radio play, and Pati and Amy have been really great to work with for online, print, and social media.

Are you making a living with music yet? Or expect to soon?

The band and I want to be out on the road as much as possible and are working our way up to it. Making a comfortable living is the goal, and it feels closer than it has been in the past. But as the song goes, “It’s a long way to the top if you wanna rock ‘n’ roll!”

Do you have any interest in signing with another label or do you think you’ll stick with Ruf for a while and, without naming names, do any larger labels have interest in you?

I am happy working with Ruf and plan to work with them for the foreseeable future. I will definitely be releasing my next album with them, which I recently started to work on. Who knows what the future will bring, but I do expect great things to come out of my relationship with such an awesome team.

How does On My Way compare to High Road creatively, and personnel, production, and sales wise?

On My Way was recorded at Degraw Sound Studios in Brooklyn with Ben Rice producing it. He brought such a cool edge to it.

They are similar in the sense that both albums were recorded with the bulk of the tracks going down live with great musicians who happen to be friends. I love recording that way! We had more time and a larger budget with On My Way, so more production was involved. I also played the majority of the guitar on it, which was really fun. Both albums to me reflect a raw feel in both the emotional side, as well as the recording side. In terms of sales, On My Way did more so far, and it was amazing to see it reach No. 6 on the Billboard Blues chart.

It seems like a girl made High Road and a woman made On My Way. You seem wiser, rougher, edgier, and even more rootsy leaning as much to country as blues, reminding me like plugged-in Rory Block. Is this a fair assessment?

Yes, I feel like I grew a lot in between both albums, so that is a very fair assessment! I did not have any real studio experience prior to the recording of High Road, so it was a very trial-by-fire situation. Everything I learned during that experience I was able to apply to the recording of On My Way. I felt much more confident and in control of what I was doing in the studio, and I am glad that comes across in the songs.

What artists have inspired you the most and why?

In the early part of my life, I was inspired by what was playing in my house, which was mainly classic rock and The Beatles. I became especially tuned into John Lennon because I read a biography and was so inspired by his ambition and drive. I was also fascinated by Jim Morrison and his writing style and became enamored with Janis Joplin and her gutsy sound. In fact, “Me and Bobby McGee” was the first song that I sang in front of people. It wasn’t until later in my teen years that I got heavily into the blues and discovered all of the greats, like Elmore James, Freddie King, and John Lee Hooker. I learned how much blues was the common thread in all of the music that I was drawn to. During that time, I also discovered badass women who continuously inspire me, like Bonnie Raitt, Susan Tedeschi, Grace Potter, Carolyn Wonderland, Ruthie Foster, and the list goes on!

When and where are you performing into fall, and which of those dates are you most looking forward to?

There are quite a few New Jersey shows coming up this summer, which I’m really excited about! I can’t wait to play at festivals like the Heritage Blues Festival in West Virginia and the Bayfront Blues Festival in Minnesota. Festivals like these are an amazing opportunity to get in front of more people and they always have a good vibe! And then I will be back in Europe in September and October, and I am most looking forward to playing in France. I have always dreamed of going there, let alone playing there. I think it’s going to blow my mind!

Do you have a signature song yet? If so, why is it that? If not, which of your songs most consistently elicits the greatest audience response – why do you think that is?

Not sure if it is my signature song per se, but “Carry You” is one that consistently gets a good response. There is an emotion that gets tapped into during the song that touches people, and I feel a shift in the audience after playing it. No matter how many times I play, it transports me to a special place where all of our hearts open up. Especially in light of the struggles we have all gone through in one way or another these past few years, I think this song really speaks to making it to the other side.

Are you touring with the band who recorded On My Way? Who’s on the road with you?

My partner in crime, aka my co-writer and bass player extraordinaire, Antar Goodwin, is the only studio musician who is on the road with me. We have been touring with many great musicians, which vary depending upon the location and their availability. We played a lot of the Northeast shows as a trio, but our recent run out to the Dark Star Jubilee in Ohio was our ideal five-piece band that included Jonathan Fritz on the guitar, Auston Day on the keys, and Mike Dawson on drums.

How have the album’s songs evolved on the road, and which change surprised you most? Why?

It’s amazing the way that songs evolve on the road. It surprises me most when a mistake leads to an idea that I like. This happened with On My Way. After playing the opening riff, I briefly forgot the first word to the first verse of the song so I started to groove longer on the chord. The groove was fun and sounded good, so now that’s the way that we play it! I’m curious to see how the songs continue to develop.

I just want to say a big thank you to you and the New Jersey music scene for being such a supportive home base for my music! I hope to see all of our friends and fans at our NJ shows this summer!