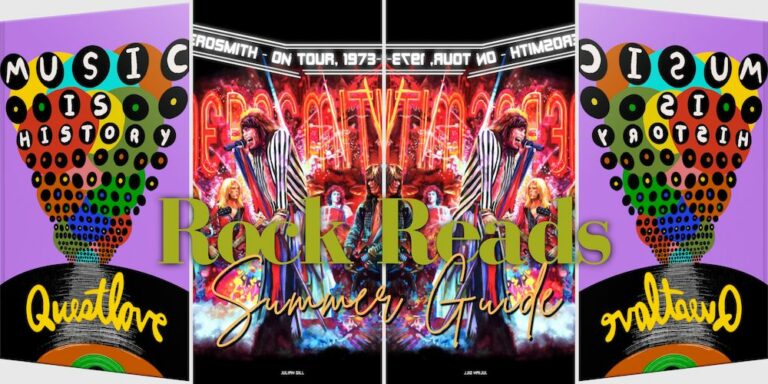 ROCK READS: A Summer Guide For The Rock & Roll Literate

Looking for a celebration of music in words to while away your lazy summer days? Look no further.

At one point in his exceedingly enjoyable Music is History, producer/drummer/educator/author, and shameless fellow music geek, Questlove astutely quotes 19th century Danish philosopher Soren Kierkegaard: “Life can only be understood backwards, but it must be lived forwards.” This pretty much explains what music journalists (de facto historians) do when we attempt to frame music in the context of its times and beyond. Questlove brilliantly balances this axiom/call to arms in the personal and cultural for music is in his DNA as a musician and an intellectual. And if there is a more entertaining book on music as history, I defy anyone to name it.

To say I loved Music is History is an understatement. It spoke to me the way I usually speak to others, or more to the point write in this paper, magazine pieces, and my own books on music. Questlove has found a voice so filled with deep minutia and profound conclusions, it is quite intimidating. If I weren’t having so damn much fun discovering and rediscovering the songs/albums/artists that run a historical thread through Music is History, I might be pissed at him for this fantastic idea!

The highlights of his journey from birth (1971) to the present, include (but are not beholden to) the author’s deconstruction of samples through hip hop’s evolution to bridge the gap between generations of celebrated soul/funk artists whose work was reimagined and rediscovered through the art form. There is also the discussion of musical appropriation, the slow erosion of the cultural purpose behind rap/hip hop, the primacy of the Em bass line in dance music, musicians as confessors, and how history can be viewed through the prism of our personal connection to music.

Moreover, any book that dedicates a chapter to Prince and the Revolution’s underrated 1985 masterpiece Around the World in a Day is a winner for yours truly. This was so much fun!

Author and rock historian extraordinaire Julian Gill has done it again. Aerosmith on Tour, 1973-85 is living antiquity, an exhaustive, extensive, unbelievably detailed trip across a decade of road stories, trinkets, facts, side stories, statistics, and images that frame one of the most impressive touring runs in the pantheon of rock and roll.

Laid out in a dual compendium with his online archives, much as Gill has accomplished for Aerosmith’s contemporaries, KISS, this time (and man is it ever, the author warned me not to drop it on my foot) covers every aspect of Aerosmith’s journey from Boston bar band to the heights of 1970s superstardom, the band’s implosion and retooling, which culminates with their comeback pre-mid-1980s revival (previewing the most unlikely and spectacular second acts in rock). I was at one of those reunion shows at a stormy Orange County Fairgrounds in 1984 and it remains one of the best concerts I have ever seen by any band. And Julian’s got it cold, even hinting that there might be a recording of it!

No Aerosmith fan, hell, no fan of 1970s rock can live without this book. It is the collection of all collections (he even has solo projects and ensuing tours), and to think Gill is threatening to keep going – a follow-up volume into the second-act career – even going so far as to reaching out to readers to contribute. This is a true grassroots book/online effort that is so unique it may spawn imitators, but in no way duplicators. Gill’s ability to mine minutia, find the gems, and get to the crux of the facts is without peer, and this volume may be his finest achievement.

Arguably the most political of books about arguably the most political of bands, U2’s The Joshua Tree – Planting Roots in Mythic America dissects the aim and purpose, history and influence of the legendary Irish band’s finest album and this reviewer’s selection in his Top Five of All-Time. Author Bradley Morgan is on a personal and political journey of his own, which he covers with zero ambiguity in the book’s epilogue, something clearly expressed in each of the ensuing chapters that break down each of the Joshua Tree’s eleven brilliant tracks. This is a fan’s perspective, mixed with research and the voices of those who have waxed poetic about its themes for decades, shedding light on one of the most powerful statements ever presented by a rock band.

There is plenty to love here if you grew up, as I did, with U2 – a band that mattered most for wearing the political and spiritual on its collective sleeve from day one. But Morgan goes to places deeper than perhaps even U2 perceived back in 1987 and came to learn as they toured the record, specifically in America, as captured in the 1988 film, Rattle and Hum. To wit: Morgan spends much of the book following U2’s 2017 tribute concert tour for the thirtieth anniversary of the album and juxtaposing its messages of America mythos and promise versus its hypocrisy – framed in the chaotic months of the Donald Trump presidency and the critiques proffered by the band originally n the mid-eighties of Ronald Reagan’s America and Margaret Thatcher in the UK.

As a fellow author of framing a rock album in its times and its effect on us all, I can confidently state that Morgan succeeds in providing further meaning to U2’s finest work, filling much of the book with furious sincerity to the music that moved him, hoping to move the reader as dramatically.

Author Caryn Rose begins her framing of the import of Patti Smith with a note about this not being a biography, but indeed, it very much is, but with the added tone and perspective the subject deserves. Part of a series from University of Texas Press Music Matters books that include similar treatises on Marianne Faithful, Solange, Karen Carpenter among others, Why Patti Smith Matters is fast-paced ride through the artistic journey of one of the most influential artists of the mid-to-late 1970s New York punk movement.

Rose is a fan, and more than that, she eloquently depicts the pertinence of Smith’s appearance on her debut album, the iconic Horses black-and-white photograph of Smith leering apathetically, and her intense Saturday Night Live appearance in the autumn of 1976 – one that also blew yours truly away. Much of the background material has been covered by Smith herself in Just Kids (which I reviewed here in 2010, and her follow-up, M Train, in 2015), but it was Rose’s concentration on the time period Smith and her then husband Fred “Sonic” Smith of the MC5 married and decamped in a suburb of Detroit in the 1980s that was special for me. We read how much it flummoxed the author as a fan that Smith retreated from the public eye and essentially her art, but also how much the author’s feminism and professional hindsight sees it as an afront to the (woman) artist’s right to have a life outside of celebrity, something Patti Smith always claimed was not the aim of her career, and how she might have been even more prolific because of it.

Life on Two Legs: Setting the Record Straight on Queen, The Beatles, Elton and Bowie and the Ultimate Rock Studio, Trident by Norman J. Sheffield (2013)

There is a very convincing argument to made, and Norman Sheffield certainly makes it in his page-turning Life on Two Legs, that his studio’s influence on the 1970s era of rock in the UK and beyond has no peer. The founder and proprietor of the legendary Trident Studios, tucked in a little alleyway in the Soho District of London, was the epicenter of the rock/pop world, effectively launching the glam movement with the birth of Marc Bolan and his T Rex, David Bowie, and Elton John, three massive British artists that would dominate the charts and pop culture for years to come. And this is not even to mention, which Sheffield does in great and gory detail, Trident’s discovering, developing, and managing of Queen, a monster rock outfit that would be an international hit-making and touring phenomenon.

If Sheffield did nothing but discuss the history of Trident’s groundbreaking studio period (the first of its kind in the UK to embrace what was going on in the U.S. in turning the studio into a place of comfort to create like New York City’s Record Plant or L.A.’s Sunset Sound) this would be required reading. But add Trident’s advent into 8-Track and then 16-track recording, seducing the Beatles, the Rolling Stones, and a host of other epic acts, and what you have the living evolution of rock and roll in its second generation.

Sheffield also duly covers he and his colleagues, some of them the most important producers/engineers of the period, Ken Scott and Roy Thomas Baker, to name just two, expanding the brand to film, video production, tour scheduling, and more. Trident was the most groundbreaking enterprise in pop music and Queen’s massive success underlines this.

Alas, Sheffield also describes the terrible business side of his creative venture, not the least of which “the Queenies,” as he affectionately calls them, as their naiveté, greed, and overall dumbness that led to a terrible split. More than half the book is dedicated to this stirring saga and for good reason. It is, like most of Trident’s triumphs and tragedies, a cautionary tale. One that needed to be told by the man who made it and lived it.

Robert Hilburn, respected music journalist from the L.A. Times for 35 years takes on the life of the legendary Paul Simon, whose mercurial musical journey spans nearly six decades in Paul Simon: The Life. Although at times the writing is as dry as a Bob Woodward political exposé, the author provides new perspective on the life and times of Simon by including the singer-songwriter’s commentary as late as 2017. And so, this is a biography with a little memoir thrown in, which makes it unique. However, what makes it a must read for fans of Simon and music history in general is it includes pages and pages of how this genius of songcraft plies his trade. I need to point this out again, because it is a glaring rarity in rock/pop bios; Hilburn writes, using copious Simon quotes, how one of the great American songwriters of any generation does it. What a concept! Don’t sleep on it, because this should be a template for every one of these books going forward.

One of the elements of the book that really struck me is throughout an uncompromising artistic career from chucking Simon & Garfunkel at the absolute height of their earning and artistic powers to working with eclectic musicians from all over the globe across genres (Graceland – South African and Rhythm of the Saints – Brazilian), and tackling film scores (One Trick Pony) and an ill-fated Broadway play (The Capeman), Simon, and thus Hilburn, are obsessed with winning awards, as each year’s Grammy nominations arrive with Simon obsessively, almost to the point of shifting his moods and future inspirations for a spate, tuning in. The bevy of awards that would come Simon’s way meant so much to him it borders on the edge of creepy and self-serving, but it also shows how in-tune the performer was with the shifting tides of music for 60 years. Unlike many of his contemporizes, even Bob Dylan, who had a comeback in the early aughts, Simon would return again and again as a seminal voice in the pop world.