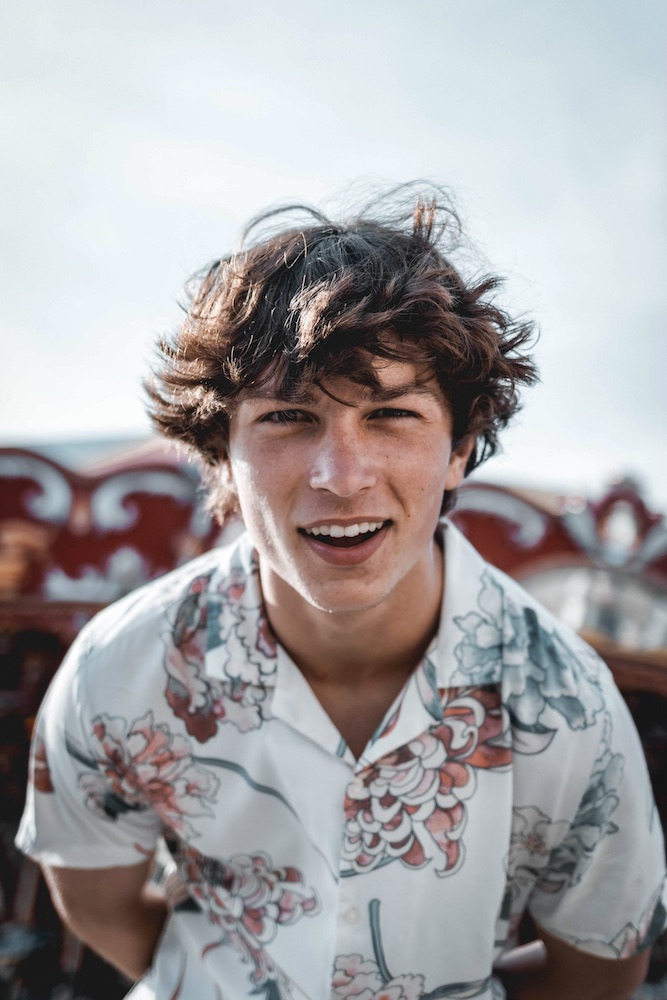 His TikTok username is ‘guy on a guitar,’ which sounds vague to most, but keenly describes the quaint, homegrown, singer-songwriter nature of this New Jersey performer.

Kevian Kraemer is an artist with boy-next-door charm, evident musical abilities, and a level head on his young shoulders. He approaches his artistry with ease and simplicity; something that wonderfully juxtaposes the fact that his career is starting off mid-pandemic and predominantly on the Internet (thus far). Kraemer is an indie pop professional already. His handful of singles are melody-laden ear worms with a bite to them. (You are not short on heart with anything the Jersey native releases.) His latest, “Sweater,” and its corresponding music video, are something worth talking about since its immense love and immediate growth over the past month. So, we did just that – talk to Kraemer himself.

“Sweater” is a song you can jam to, dance to, and sing along to. It’s also a song that, if listened to closely, has a lot of lyrical depth. What were you feeling when putting it together and what do you hope people get out of it?

There’s definitely a lot going on behind the lyrics in “Sweater.” I always use songwriting as a way to get in better touch with my feelings and I wrote this during a time where I needed to hash out the conflicts in my life the most. I hope that people take the upbeat energy of the song and allow it to bring a more optimistic light to harder times.

How has the reception been for this? How has the “Sweater” era been so far, so to speak?

I am so grateful for the support that has come so far with this release. It has only been a month and “Sweater” has already accumulated over 50k streams and I’ve gained a lot of new fans.  I can’t wait to see what else is to come with this song, it certainly feels like the beginning of a new era in terms of finding my sound and image as an artist. I also released a lyric video for “Sweater,” which is now up on YouTube.

In your opinion, what makes a good single release? Why was “Sweater” one that stuck out for you to release as a standalone song?

A good single is a song with one line that you just can’t get out of your head. I always know which song has to be the single when I start playing them for my friends and they start singing back that one line. “Sweater” had a new sound that my fans hadn’t heard from me yet and I thought it was time to show this side of my musicianship, especially stemming from my guitar playing. The lyrics had the right punch that reminded everyone of that one person in their lives.

Tell us a bit about the video accompanying “Sweater.” What was the process like? How did it turn out? To us, it’s simple, but effective – almost nostalgic in its simplicity, actually.

The video was a lot of fun to make. It was shot, directed, and edited by Alex Lyon. She made my first experience shooting such a positive one and offered so much clarity to my vision for “Sweater.” Asbury Park, NJ offered a lot of inspiration to us; Alex and I walked around the city and we gravitated most to simple scenery that allowed the lyrics to take charge. We also threw in that white sweater as much as we could….

How has New Jersey and its illustrious music scene shaped you? Has your sound and art been affected in any way because of where you are locally?

I love living in Asbury Park and I’m lucky to be down the street from such an incredibly active music scene. I grew up in Lakehouse Music Studios in Asbury playing drums, guitar, and singing in a band with my friends. I wouldn’t have ever gone and started writing and producing my own music without the people I had mentoring me at Lakehouse. It’s crazy to think that I was once nine years old taking my first drum lesson and now I’m emailing the Stone Pony trying to get my name on a bill.

So many artists and bands have created a grand name for themselves because they put their work on social media: JXDN drew the attention of Travis Barker, Lip Candy are playing Sad Summer Fest, even Kate Bush is having her Strangers Things-induced renaissance right now. Why did you take to socials and what have you learned from doing so?

Last year is when I really started taking advantage of what social media has to offer for my music. All of my musician friends started to grow real followings from unapologetically putting themselves out there and making it their priority to be known. Once I figured out what type of guitar content my followers liked, I got into a really solid groove of posting and, in time, led to a really positive response to my original music. I couldn’t ask for a better fanbase. I learned that anyone can be successful if they really want to be through my journey with social media.

As you navigate releasing singles and making music, as well as balancing an online persona, you’re also a student, wrestler, and young person navigating being a teen in quite the hard times. How has this corner of your life – the artistic, show-playing, songwriting side – played a role over the difficult last two years or so?

The last two years have gotten in the way of so many of the activities I did as a student and teenager – especially with school and team sports. I am really extroverted and having music in my corner to substitute all the social activities that were brought to a halt was a good distraction from all the new free time that I had and was a wake-up call in the sense that it showed me what I really wanted to do with my life. Music really brought structure, inspiration, and a thrill to my life that was temporarily lost.

What do you have planned, or have hopes for, in terms of the rest of 2022?

I have so many good secrets that have to stay secret for now, but I’m songwriting more than ever. I’m collaborating with a lot of new artists, writers, and producers, and working on bringing my music to the stage. I truly feel like “Sweater” is only the beginning!

KEEP UP WITH KEVIAN KRAEMER BY FOLLOWING HIM ON INSTAGRAM AND CHECKING OUT HIS TIKTOK!