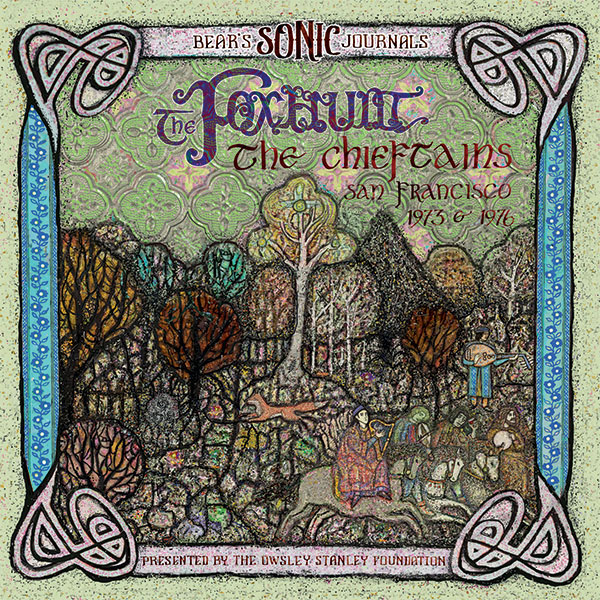 The Chieftains, The Foxhunt: San Francisco 1973 & 1976. This concert collection from the Chieftains is the ninth release from the late audio engineer and LSD maker Owsley Stanley’s archives, which have also yielded excellent live albums from artists like Tim Buckley and Johnny Cash. The two-disc, two-and-a-half-hour set delivers a pair of well-recorded 1973 and 1976 shows plus two bonus tracks: an interview with the Grateful Dead’s Jerry Garcia, who discusses the Irish roots of bluegrass, and excerpts from a conversation with Chieftains co-founder Paddy Moloney that was conducted shortly before his death last year.

If you’re not familiar with the Chieftains, you should be. Their albums, which have won six Grammys, have gone a long way toward popularizing Irish music worldwide and have resulted in collaborations with fans ranging from Van Morrison and Elvis Costello to Sinead O’Connor and Mick Jagger.

These San Francisco shows are a fine introduction for neophytes and must-listening for long-time fans. The 1973 concert captures the Chieftains on their first U.S. tour, opening for Old & in the Way, Garcia’s bluegrass band. The 1976 recording – made after the group was much better known in the States – finds the Chieftains headlining at the much larger (and sold-out) Great American Music Hall. The recordings emphasize traditional material and songs by 18th-century Celtic composer Turlough O’Carolan and come with a hardcover CD-sized book that includes previously unpublished photos and extensive liner notes.

Backed by a drummer, a keyboardist, and an electric guitarist, the pair offer a rock-tinged sound that sometimes – for example, on the anthemic “Days Grow Longer” – recalls outfits like 10,000 Maniacs. Elsewhere, such as on the pensive “Ward” and the title cut, they seem more redolent of traditional folk groups like England’s Fairport Convention. Throughout, they impress with likable, complex arrangements and beautiful vocal and instrumental work.

The Sensational Country Blues Wonders!, The Adventures of a Psychedelic Cowboy. This is the follow-up to 2020’s The World Will Break Your Heart, the first album of original material from New Jersey–based Gary Van Miert, who performs as the Sensational Country Blue Wonders!. Like the earlier CD, this one incorporates rock, gospel, and country elements, but it adds a new component: psychedelia.

Van Miert, who wrote all the songs, employs instruments such as sitar, mellotron, and theremin, and offers lines like “I’m a trippy cowboy, riding on the astral plane” (“The Psychedelic Cowboy”) and “The cosmos is dancing with joy and vitality” (“There’s a Hole in the Fabric of My Reality”). Among the album’s influences, he lists the Jimi Hendrix Experience, the 13th Floor Elevators, Peter Max, Salvador Dali, traditional country music, and “British music hall filtered through the Kinks and Beatles.”

Some of the lyrics are rather puerile, and you might well take issue with Van Miert’s claim that he has created a new genre called “psychedelic Americana.” (Ever hear of the Grateful Dead?) That said, this is a fun outing from start to finish—well sung, lighthearted, and full of bright, catchy melodies.

3 Pairs of Boots, Mighty Love. This is the third album from multi-instrumentalist Andrew Stern and his vocalist wife, Laura Arias, whose last release, Long Rider, offered a collection of well-hooked pop-rock originals. Mighty Love, which finds the pair accompanied by a drummer and a keyboardist, is just as engaging. Stern produced and wrote or co-wrote all the songs, aside from the addictive title cut, which Arias penned, and “The Waiting,” a moody cover of the 1981 Tom Petty hit.

The group isn’t taking any side trips from the mainstream, much less blazing any new trails here. But its predominantly upbeat material is consistently attractive, thanks to hummable melodies, Arias’s vocals, and Stern’s jingle-jangle guitar work.

Robin Lane, Dirt Road to Heaven. This singer/songwriter remains best known as the leader of a late 1970s/early 1980s Boston-area rock band whose work was reissued on 2019’s Many Years Ago: The Complete Robin Lane & the Chartbusters Collection. Since her days with that group, though, Lane has been sporadically releasing solo albums.

This 11-track latest one, most of which Lane wrote or co-wrote, offers a lot to like. Assisted by a crew that adds accordion, banjo, drums, lap steel, backup vocals, and more, Lane flirts (not for the first time) with country music on songs like “Faded Leaves,” showcases gorgeous vocal work on numbers like “Hurricane Watch,” and turns up the heat on tracks like the sultry “Hunny Dummer,” where she sings, “Turn off the phone, turn on George Jones, and let me show you how I feel.”

Martha Spencer, Wonderland. This is the overdue follow-up to Appalachian singer/songwriter Martha Spencer’s eponymous 2018 debut album, which introduced what appeared to be a fully formed talent. Nothing on Wonderland changes that impression. The CD, which mingles eight well-crafted originals with an equal number of covers and includes several duets with male singers, finds the Virginia-based singer in top form throughout.

Spencer plays guitar, banjo, and bass and is backed here by a long list of first-rate instrumentalists and assorted vocalists, including the veteran bluegrass artist Alice Gerrard on one track. She seems equally at home with gospel music (“Walking in Jerusalem”), pop (Lee Hazelwood’s “Summer Wine”), blues (“Hesitation Blues”), country ballads (her own gorgeous “Yodelady”), and traditional bluegrass (“Creekfield Woman”).

Buck Owens and the Buckaroos, Bakersfield Gold: Top 10 Hits 1959–1974. The late country singer/songwriter Buck Owens, a prime architect of the stripped-down Bakersfield [California] sound, was as successful as he was influential. Over just 15 years, he topped the country charts 21 times and scored an additional 25 Top 10 hits. This two-CD release collects all 46 of those numbers, among them  “Act Naturally,” which Ringo Starr and the Beatles famously covered, and “I’ve Got a Tiger by the Tail.”

In recent years, the Omnivore label has been reissuing many of Owens’s original albums as well as a trio of two-CD sets that collect all his singles from 1957 to 1975. If you want the kit and caboodle, those are the records to buy, but if you don’t want to dig that deep, pick up Bakersfield Gold, which serves up all the essentials.