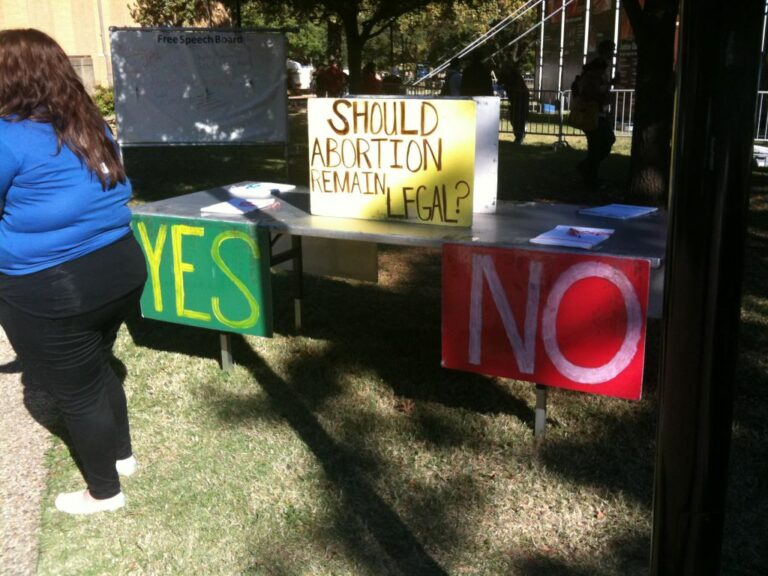 "Anti-Abortion Education Campaign (UNT)" by Wesley Fryer is licensed under CC BY-SA 2.0. To view a copy of this license, visit https://creativecommons.org/licenses/by-sa/2.0/?ref=openverse.

As the mid-term campaign season heats up after Labor Day the key word has dramatically shifted from inflation to abortion. Thanks to the June Supreme Court Dobbs decision that systemically enslaved women, the political narrative has flipped from a Republican wave to a Democratic surge. There has been an enormous increase in Democratic Party (the only party that stands for women’s rights left) support, enthusiasm, and voter registration across the country, and it shows no signs of abating. Because of the aforementioned inflation, President Joe Biden’s low approval ratings, and mostly racist gerrymandering, the Republican Party will take the House, but the Senate and the national fervor has gone from close Republican to strong Democrat in a wild two-and-a-half months. None of this data has escaped Republican candidates, who now either run the other way from Dobbs, lie that they don’t support complete bans on abortion, or simply scrub their strong anti-women’s reproductive rights rhetorical history in the hopes no one will realize a fascist Republican-controlled Supreme Court has stolen the liberties of 51% of the electorate.

A new Pew Research Center poll the last week of August showed abortion rising as a “very important” priority for Democratic voters – 46% in March to 71% currently. Excuse me? What? You couldn’t find a 25% jump in a political position to support a law banning the drowning of kittens in this polarized environment. Even Republican voters (poor, misguided fools) support some portion of women’s reproductive rights – rape, incest, the life of the mother – but that’s not where their party has been or is now. It’s currently a federal crime in Texas, with a lifetime sentence for murder, to get an abortion today. It is complete madness, and it is all on Republicans. And those running with an R next to their name are finally getting the hint people are pissed.

Take New York’s 19th Congressional district special election last month. Talk about purple. These people have voted for Obama, Trump, and Biden in that order. Republican Marc Molinaro was a shoo-in before Dobbs. After Dobbs, Democrat Pat Ryan beat him because he rightly warned voters Molinaro, if elected, could move New York in the direction of enslaving its women like Texas, tossing them in jail for what happens inside their bodies.

This special election result, and the results of four others including Red State Alaska in which former Masked Singer and Wife Swap contestant Sarah Palin was defeated, and the numbers coming out of the Kansas voter overwhelming election support stopping a ban on abortion, has reverberated throughout the Grand Old Party. Democrats have out-performed prognostications and previous electoral metrics by as many as eleven points in the aggregate. As a result, Republican candidates should be and are becoming concerned. You can see it in their complete refusal to touch the issue their party made an issue – but don’t believe for one minute any of the whiplash pivots Republican candidates make. Just remember what the game show president’s parade of Supreme Court Justices said when asked about Roe v Wade when being vetted for the gig. “It’s settled law.” Really?

Now take the phony Arizona Senate candidate Blake Masters, who trails Democrat Mark Kelly by eight points causing him to scrub his website of his support of a “federal personhood law,” which would turn fetuses into full citizens with social security numbers and allow pregnant women to claim as burdens on their tax returns. Masters then, within hours after the pro-women’s rights Kansas vote, immediately released a video softening his abortion stance from “100% pro-life” to “exceptions across the board.” Sure. “Settled law” and all that.

“We regularly update the website,” said a spokesman for previously bold “100% pro-life – no exceptions” Michigan congressional candidate Tom Barrett, who within hours after the Supreme Court decision, wiped that nonsense from his campaign platform. Same goes for Iowan Republican House candidate Zach Nunn, who a month before Dobbs raised his hand when asked during a primary debate in May whether “all abortions should be illegal in this country.” After Nunn’s Democratic opponent, Rep. Cindy Axne, ran an ad using the video of this, Nunn rushed to publish a fifth-grade level op-ed backtracking like a busted cheating spouse.

Minnesota Republican gubernatorial nominee Scott Jensen (A fucking doctor!) was asked about abortion by Minnesota Public Radio in March and said he would “try to ban abortion” if he were running the state. This is before the Supreme Court left it up to states to enslave women, and now he says he supports abortions for victims of rape, incest, or if the life of the mother is threatened… something no one believes because, you know, “settled law.”

To wit: The week before I write this, South Carolina State Rep. Neal Collins emotionally recounted the arduous journey faced by a 19-year-old woman whose fetus was not viable, but that attorneys told her doctor they couldn’t extract it because it still had a heartbeat — the standard set in the bill supported by Collins that had gone into effect just the week before. “The doctor told me at that point there is a 50% chance she will pass the fetus in the toilet and a greater than 50% chance that she’s going to lose her uterus. There’s a 10% chance that she will develop sepsis and herself, die.” The young girl was sent back into the street. Collins later blubbered: “That weighs on me. I voted for that bill. These are affecting people.” Days later he voted for another bill banning abortion. “Settled…” Oh, forget it.

No Republican should EVER be believed on this issue. If you want women to retain the rights to their organs, then you should NEVER under any circumstances allow a Republican to gain power. If they do, they have shown time and again they will strip you of your rights and do not care who believes what. They are lying and will continue to lie to save their political hides. But their actions speak loudly.

The mid-terms are coming. And there is only one voice you have. Keep Republicans from office until a national protection for women’s reproductive rights are guaranteed. And if this means taking the senate and eliminating the filibuster and filling the Supreme Court with justices that will protect their constitutional rights or get enough true Americans in the Houser and Senate to make it law, so be it.

Until then, ALL Republicans want to do is control the rights of women, no matter what they say.

Believing otherwise is stupid and insane, and if you vote for a Republican, you get what you deserve.

James Campion is the Managing Editor of The Reality Check News & Information Desk and the author of “Deep Tank Jersey,” “Fear No Art,” “Trailing Jesus,” “Midnight For Cinderella,” “Y,” “Shout It Out Loud – The Story of KISS’s Destroyer and the Making of an American Icon,” “Accidently Like a Martyr – The Tortured Art of Warren Zevon,” and most recently, “Take a Sad Song… The Emotional Currency of “Hey Jude.”