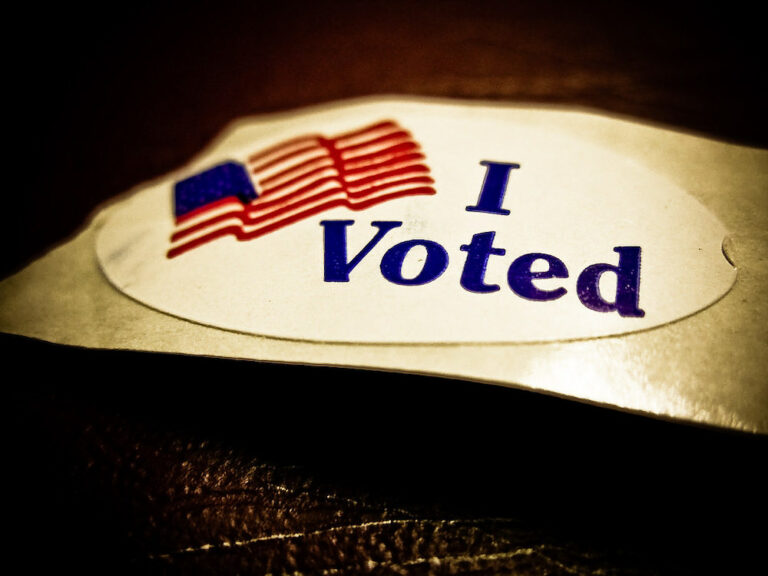 "I Voted!" by Vox Efx is licensed under CC BY 2.0. To view a copy of this license, visit https://creativecommons.org/licenses/by/2.0/?ref=openverse.

We’re down to the wire on the 2022 midterms that by all measure of history and the current state of the economy should be a Republican blowout, but there are problems with Republican candidates, the party’s position on permanently having the government control the innards of our female citizenry, and the usual parade of election deniers. (I am not certain I get the idea of saying every election is rigged but continue to run in elections. Isn’t that kind of the definition of insanity?) Who am I to judge? I have made my points clear here. You can’t vote Republican if you believe women should have control over their bodies. Economies shift with the wind, but rights are supposed to come from just being. Jefferson wrote something about this in the fancy Deceleration of Independence we’re so damn proud of. Independence. Good one. Guess women don’t count.

Be that as it may, I wish to review some of the weird shit that has gone down in the final week or so – some of it related to the election and some of it just the normal pathetic stuff.

Let’s start with Kanye West’s battle against a sneaker company to get more money and using his – I’ll be cynical here (Shocker!) – faux outrage against Jewish Americans to do it. West has phony street cred. He is as much a capitalist whore as Elon Musk. (We’ll get to him later, stick it out.) According to the perpetually unhinged West, Adidas has stolen his designs or some such, but no one actually cares about one rich asswipe taking on a massive sneaker asswipe corporation, so West decided to jam antisemitic language into his complaints. The tried-and-true Nazi stuff about Jews “owning everything” that he learned from his buddy Donald Trump has naturally caused a furor and, in the Black community, some scary traction, especially among young Black men. According to West’s marketing gurus this demographic is easily swayed by such rhetoric. I am not inclined to agree with this assessment, but it is the impetus for this shameful powerplay and has consequently cost West the rest of his sponsorship agreements. So, nice job there.

All of this would have seemed like a fart in the proverbial wind until Brooklyn Nets point guard, and equally deranged idiot, Kyrie Irving began promoting an antisemitic screed by author Ronald Dalton called Hebrews to Negroes: Wake Up Black America on his Twitter account during all of this. A quasi-religious Turner Diaries for the hip hop set, which is actually the type of lazy historical philosophy that fringe hucksters like Glenn Beck peddle as intellectual discourse to people unfamiliar with the concept, it has, again, held sway in the growing “grievance politics” in African American subculture. This has brought a little-discussed aspect of racism that is ubiquitous beyond the white supremacy kind that gets all the publicity, especially since the MAGA January 6 fiasco.

Enough about this crap. Soon both West and Irving will go the way of the Hoola-Hoop.

Perhaps that’s where Twitter is going now that multi-billionaire funny man Elon Musk purchased it. The outcry seems odd, as Twitter is already mostly an imbecilic symbol of all that has gone sideways in our culture and will continue to thrive that way (see above paragraph). I don’t see the point of being pissed, unless you’re Stephen King and you don’t want to pay Musk a price for “authentication checks.” Again, rich guys whining over 10 bucks is enough to go on Twitter and threaten to take a hammer to someone’s spouse or whatever it is that happened to Nancy Pelosi’s husband, who was just hanging around being married to the House Speaker and ended up outed as an underground sadist homosexual predator or a priest, your choice of title. Who knows what happened there? And should we care? The Pelosis are loaded. Enough rich people problems.

There was one non-celebrity issue that did perk up in the final week of Midterms before Election Day.

As if voting to provide equal rights under the Fourth Amendment to people whiteout penises was not enough reason to spat on Republican scum, there was a leaked memo from the desk of another brainless twat, probably new Speaker of the House Kevin McCarthy, of a proposed five-point GOP plan to raise the eligibility age for Social Security and major changes to Medicare. And while these are not completely wacky ideas, the timing could not be worse. Since no one believes a party that told us Roe v Wade was settled law, the denials are falling flat.

Alas, it is a long shot that this will do much to shift the narrative that Republicans have gained poll momentum over the past month due to another spike in gas prices, a vacillating stock market and continued high consumer goods prices. Statistics were desperately floated by Democrats about a 70-year-high in corporate profits to combat this, but I’m not sure progressives will feel particularly jazzed by this clever “but-what-about-ism” revelation. The whole rich asswipe thing again?

Still, nothing has changed on this ballot for me. The federal protections for women’s reproductive rights in Roe v Wade is gone and it is not coming back. The Right-Wing, Republican bucket-holding Supreme Court decided to let states decide the legality of private and safe medical procedures dealing with the organs of our citizens. Republicans want to make this the purview of the government.

What do you want?

For me, independence is the main issue.

The new Prohibition – a completely unmanageable law based on moralism that will sink under its own untenable weight – must go.