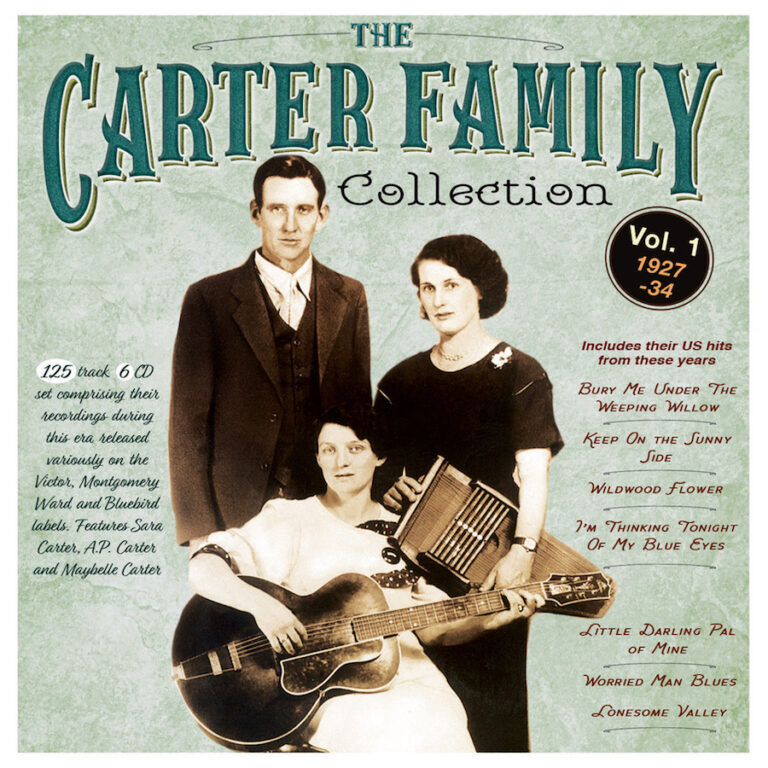 On The Record: The Carter Family, Frank Zappa, & Janis Joplin with Jorma Kaukonen

A Treasure Trove from the Carter Family

No collection of essential country or folk music would be complete without a large sampling of material from the Carter Family, whose work helped to define and popularize these genres. The original lineup of this groundbreaking outfit consisted of lead singer and rhythm guitarist Sara Carter; her husband A.P. Carter, who wrote nearly all their now-classic songs; and her sister-in-law Maybelle Carter, the lead guitarist and harmony vocalist. The group, which later incorporated other family members, began recording in 1927 and disbanded in 1944, though various related aggregations carried on after that.

Both packages – which first came out about 20 years ago and are being reissued – are chock-full of songs that have influenced generations of country, bluegrass, rock, and folk artists and have been recorded by everyone from Doc Watson, George Jones, and Hank Williams to Linda Ronstadt, John Prine, and the Nitty Gritty Dirt Band. Some of these numbers – which include “Single Girl, Married Girl,” “Wildwood Flower,” “Can the Circle Be Unbroken,” “I’m Thinking Tonight of My Blue Eyes,” and “Keep on the Sunny Side” – are nearly 100 years old. Like Harry Smith’s equally influential Anthology of American Folk Music, which dates from 1926 to 1933, these tracks evoke an earlier, simpler time yet still sound vital today.

As you can hear on such recent archival releases as Zappa ’88, Zappa/Erie, and 200 Motels, Frank Zappa often interspersed his noteworthy jazz-rock with puerile humor. He stuck to the former on 1972’s Waka/Jawaka and The Grand Wazoo, however. Though the bands on these records incorporate some members of Zappa’s Mothers of Invention, such as keyboardist George Duke and drummer Aynsley Dunbar, the sets also feature a variety of fresh talent, including such standouts as trumpeter Sal Marquez.

The cover art on Waka/Jawaka suggests that it’s a follow-up to 1969’s Hot Rats, and it sounds like it. The album’s instrumental centerpieces, the 11-minute title cut and the 17-minute “Big Swifty,” are tightly constructed showcases for guitar, bass, drums, and brass. Even better is The Grand Wazoo, which finds Zappa again sticking mostly to instrumental jazz-rock but with an expanded, 20-member ensemble.

An excellent new five-disc box called Waka/Wazoo adds substantially to the original releases. It includes two CDs’ worth of alternate takes, alternate mixes, and outtakes from the recording sessions and two that combine concert performances from San Francisco’s Winterland Ballroom with demos for a Duke solo project that features Zappa on guitar. Disc Five is a Blu-ray that contains the original Waka/Jawaka and The Grand Wazoo in hi-res stereo, Dolby Atmos, and Dolby TrueHD surround sound.

Those half-century-old albums sound very good in these audiophile formats, but the biggest treats here are arguably on the first four discs, which are loaded with previously unheard and often engrossing performances of complex and nuanced material. Along with Hot Rats, the recordings in this box underscore Zappa’s strengths as a jazz-rock fusion composer, arranger, and band leader.

You know an artist is truly famous when even a lo-fi reel-to-reel tape of a 23-minute, nearly 60-year-old at-home rehearsal is restored and released with a title that proclaims it “legendary.” That’s the case with this CD from Janis Joplin and future Jefferson Airplane and Hot Tuna guitarist Jorma Kaukonen. They made The Legendary Typewriter Tape – whose moniker refers to the fact that you can hear Kaukonen’s wife, Margareta, typing in the background – on June 25, 1964. That’s more than two years before the release of the Airplane’s first LP and more than three years before Joplin turned heads at the Monterey Pop Festival and released her debut record with Big Brother & the Holding Company.

The songs – taped at Kaukonen’s house while the duo were preparing for a show in North Beach, California – include two Joplin originals, “Kansas City Blues” and “Daddy, Daddy, Daddy”; the traditional “Hesitation Blues,” a number that Hot Tuna later featured as the opening track on its debut album; and three more blues classics: Richard Jones’s “Trouble in Mind,” Lonnie Johnson’s “Long Black Train”; and Jimmie Cox’s “Nobody Knows You When You’re Down and Out.” The recordings of “Hesitation Blues” and “Trouble in Mind” previously surfaced on Janis, a 1993 anthology, but the other numbers have apparently not been officially released until now.

“Legendary” may be an overstatement, but this recording does offer a fascinating peek into the auspicious early efforts of two artists who would soon be major figures in the world of popular music. Kaukonen’s work is redolent of his performances on Hot Tuna’s eponymous 1970 debut LP. As for Janis, this CD features acoustic country blues, not the blues-inflected rock for which she would become famous, but her talent is already obvious in these performances.