NEW YORK, NY—All of the recent Cold War Kids shows in NYC have been sell-outs, and I thought I understood why; their original take on songwriting and story-telling, their eclectic choice of instruments, and the charm of the characters they create to fill each track. But after finally seeing them (after a long time of wanting to), I was disappointed. 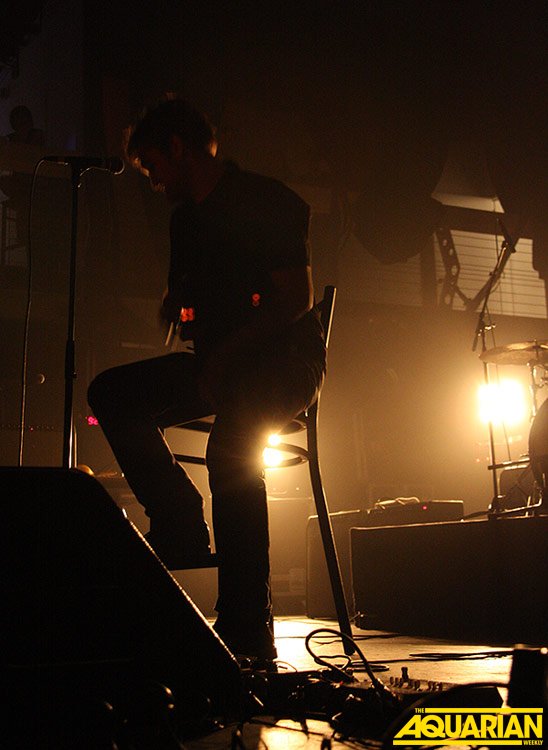 First, the lighting was terrible. Of course, as a photographer, lighting plays a big part at gigs—and theirs was limited. And I’m fairly certain it wasn’t about the money, it was more about the “dramatic effect” and the image they wanted to portray. The stage was backlit almost the entire time apart from brief moments every couple of songs where the lighting was in sync with the tempo of the song, and for short flashes, either the stage or the venue was fully lit. And to be honest, these were the best moments for the crowd. I mean, if you’re a fan, and you wait months to see artists you love, who wants to watch them play in the dark? Or stare at their silhouettes on stage? Not me. I understand they were trying to convey a mood but really, their music speaks volumes compared to their stage aesthetics, and to be honest, it just came across as arrogant.

Second, they didn’t have much banter with the crowd. Apart from song introductions and the usual line about how good it is to play in NYC, the quartet didn’t offer any more insight into who they are, how they were feeling, or what they’re all about. And third, there’s nothing better than seeing a band having a good time on stage, which they definitely were, but when this is all you see, it’s irritating. It seemed like the crowd wasn’t a huge factor for Jonnie Russell and Matt Maust in particular. Frontman Nathan Willett obviously took a lot more notice of the fans, and thanked them for cheers, but for the rest of the “kids” on stage, the only people that seemed to really exist, were the kids themselves.

This didn’t stop the crowd from going totally mad through the entire show, however. There was an enormous amount of love at Terminal 5 for the quartet, and I have never seen so many mid-song clap-alongs, or crazy cheers and whistles by fans as at the intro of each track as they recognized the next hit the band was about to launch into. Highlight songs were “We Used To Vacation,” “Something Is Not Right With Me,” “Hospital Beds” and “Every Man I Fall For,” but the best part of the night, without a doubt, was the seamless transition from “Mexican Dogs” to the band’s brilliant rendition of “Hang Me Out To Dry.”

Willett is a solid frontman who carried the show. He sings, he plays guitar, he works the keys, and he gives the band its personality. There’s no denying the Cold War Kids are talented and deserve everything that’s come their way. And according to everyone around me, the Cold War Kids were faultless. But it just feels like they think they’re too cool for skool, man. They’ve risen the ranks and appear to have become just like every other big-headed act that these guys probably once vouched and swore they’d never turn into. Even still, it doesn’t take away from the strength of their tunes which is the reason why I, and so many others, fell in love with them in the first place. From now on though, I think I’ll stick to listening to the Cold War Kids on my iPod rather than seeing them live. At the very least, it’ll make the band more mysterious, and will help make the characters in their songs more believable.