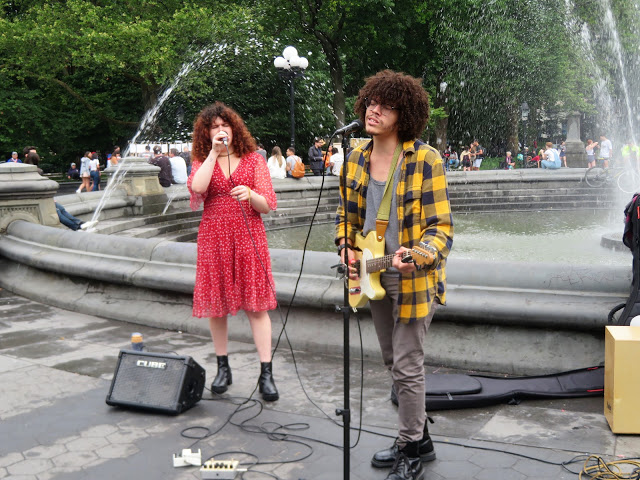 Chris Flash, the publisher of an underground anarchist newspaper called The Shadow, announced for the past week that he would host a free-admission event in Tompkins Square Park today featuring political speakers, tabling, and full concert performances by the Voluptuous Horror of Karen Black, Wer, Spike Polite & Sewage NYC, Sea Monster, Girl Dick, and Hello Mary. Flash faced a major obstacle, however. Flash’s permit for today’s event was revoked by the New York City Department of Parks and Recreation after his April 24 event in the park drew an estimated 2,000 people, far more than state-mandated COVID-era regulations allowed. Parks management was not going to look in the opposite direction today.

Yesterday afternoon, Flash told The Manhattan Beat that his attorneys were pushing for a last-minute court order that would force the Parks Department to reinstate his permit. He said the courts worked around the clock so he was hopeful that, with the court order in hand, his event could be staged. He had a back-up plan, to stage the event one block away at a community garden, La Plaza Cultural on East Ninth Street and Avenue C.

At 10:00 a.m. [June 13], four Parks Enforcement Patrol (PEP) officers were already stationed by the old bandshell area of Tompkins Square Park, ready to prevent Flash from staging his event. They told The Manhattan Beat, “no permit, no music.” By 11:30 a.m., the PEP force had doubled.

La Plaza Cultural proved to be an untenable plan. GreenThumb, which falls under the Parks Department and oversees more than 550 community gardens on public and private property in New York City, did not respond to a request to move Flash’s event there. Bill De Paola, the garden’s events coordinator, told The Village Sun this afternoon that “We tried to contact GreenThumb and, I guess because it was the weekend, they never got back to us, so we were unable to accommodate Chris, sadly.”

Nevertheless, although the PEP officers were prepared to turn away Flash and his crew, they permitted a lone busker to perform with amplification at the same area of the Tompkins Square Park where Flash would have staged his event. The day before, InCircles, Hennessey, Monte, and other bands also performed with amplification in the same spot, perhaps with a permit.

Across town this afternoon, PEP officers at Washington Square Park were shutting down musicians who used amplification without a permit. Philip Murphy, who was a contestant on television’s American Idol this year, was among the performers who had to stop performing today. Murphy and an accompanying vocalist used two microphones and two small amplifiers. They had gathered a small crowd that was becoming increasingly enthusiastic about his performance when the PEP officer interrupted him as he began a song.

Many local musicians have told The Manhattan Beat over the past few weeks that PEP officers and precinct police have been stopping them from playing and threatening them with fines for repeat offenses. Pinc Louds has been stopped so many times in so many public areas that the band seems to have found a new home at La Plaza Cultural, performing there for the second time this past Thursday. Robert Leslie, who had been a regular at Washington Square Park, recently relocated his busking to Tompkins Square Park, but he too has had to cut short his performances. EveryTing, turned away at Tompkins Square Park recently, moved across the street and performed in front of the closed Doc Holliday bar. Somewhat daunted, many solo musicians and bands continue trying to make park concerts a reality.

FULL ARTICLE AND PHOTOGRAPHS CAN BE FOUND ON EVERYNIGHT CHARLEY’S PREMIERE BLOG: THEMANHATTANBEAT.BLOGSPOT.COM.