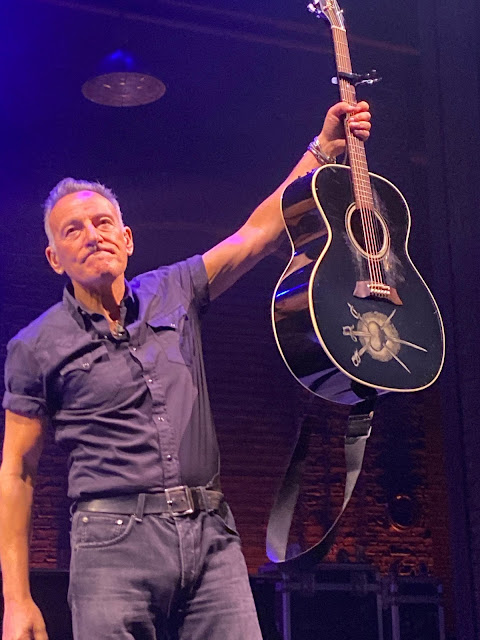 Rock and Pop Music Are the Catalysts to Reopen Broadway

Springsteen on Broadway, the intimate story and song solo show, originally opened at the Walter Kerr Theatre in October 2017 and was extended for a year. Springsteen received a special Tony Award for the production. The show was filmed and released as a Netflix special and album.

Even as most producers were beginning the discussion about reopening Broadway, Springsteen stunned the theater world by staging a return engagement that began on June 26 at the St. James Theatre. Springsteen on Broadway quickly enlisted scenic design by Heather Wolensky, lighting design by Natasha Katz, and sound design by Brian Ronan. The production ended last Saturday, September 4. Prior to the pandemic shutdown, the St. James Theatre had staged the Disney musical Frozen.

Two days before David Byrne’s American Utopia returns to Broadway, a Spike Lee-directed documentary will be shown in movie theaters nationwide for one night only. The film, first shown on HBO, will now have an introduction from Byrne and a never-before-seen conversation between Byrne and Lee.

Broadway soon will see the return of several pop-based musicals. Waitress, featuring Sara Bareilles in the title role until October 17, returned on September 2 for a revival engagement, welcoming audiences to the Barrymore Theater for the first time in nearly 18 months. Hamilton will restart at the Richard Rodgers Theatre on September 14. Tina—The Tina Turner Musical will resume at the Lunt-Fontanne Theatre beginning October 8. Girl from the North Country will bring 20 Bob Dylan songs to the Belasco Theatre on October 13. Ain’t Too Proud—The Life and Times of the Temptations will reopen at the Imperial Theatre on October 16. Jagged Little Pill again will feature songs by Alanis Morrisette at the Broadhurst Theatre starting on October 21.

Other successful jukebox musicals may be returning. In the meantime, the following productions are slated or being proposed for Broadway debuts.

MJ, a biographical musical about Michael Jackson, will be coming to the Neil Simon Theatre for previews on December 6, with the opening night on February 1, 2022.

The Who’s Tommy is targeted for a return to Broadway with its original Broadway director, Des McAnuff. The Who released Tommy in 1969 as a concept album, billed as a rock opera. The album was scripted for a film in 1975 and a staged musical in 1992. The story follows a “deaf, dumb, and blind” boy who develops pinball skills and becomes a “Pinball Wizard.” Neither the theater nor a start date have been announced yet.

A Beautiful Noise, prepared by the creative team of Tony-winner Michael Mayer (director), Anthony McCarten (book), and Steven Hoggett (choreographer), documents the life of singer-songwriter Neil Diamond. The musical is named after the singer-songwriter’s 1976 album. The show will play for one month at Boston’s Emerson Colonial Theatre starting on June 21, 2022, with a goal  to move the show to Broadway.

The Devil Wears Prada features the creative team of Elton John (music), Shaina Taub (lyrics), Paul Rudnick (book), Anna D. Shapiro (director), and Kevin McCollum (producer). The musical is based on Lauren Weisberger’s 2003 novel and the 2006 film about a woman who becomes the assistant to a brutal editor of a fashion magazine. The show, starring Beth Leavel as Miranda Priestley and Taylor Iman Jones as Andy, will open at Chicago’s James L. Nederlander Theatre on July 19, 2022, with the intention of moving the show to Broadway.

Other Broadway-aimed productions are in early development. Country music artists Jennifer Nettles is working with producer Adam Zotovich on an as-yet-untitled musical about Giulia Tofana, who sold poison to women who wanted to murder their abusive husbands in the 17th century. The Romeo & Juliet Project, a musical featuring hits by Pat Benatar and Neil Giraldo, was scheduled for a private workshop in New York City in 2020 but was cancelled due to the coronavirus pandemic. No announcements have been made yet on whether these productions will be rescheduled.