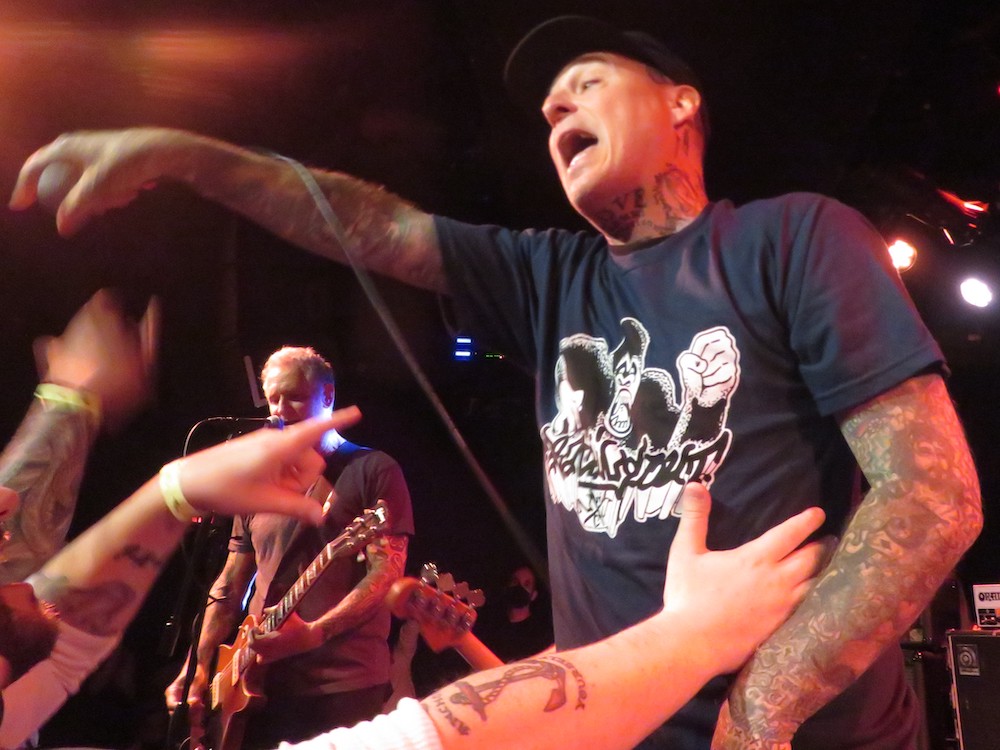 Unlike many hardcore bands that have had a revolving door to their personnel, the H2O formed in 1994 and has remained rather steadfast since 1996. Vocalist Toby Morse, guitarist Rusty Pistachio, bassist Adam Blake and drummer Toby Friend have recorded albums together and circled the globe many times, bringing American hardcore to the world. In 2015, Morse left for a few years but he has returned to help reestablish the band’s New York hardcore glory.

H2O headlined two nights at le Poisson Rouge. After impressive sets on the second day by Shutdown, Fahrenheit 451, Be Well, Cruel Hand, and Reaching Out, fans welcomed their hometown heroes, H2O. Morse, who joined the hardcore movement as a fanboy, roadie, and occasional guest singer with Sick of It All, spoke often between songs and acknowledged his antecedents in New York hardcore, including Vinnie Stigma of Agnostic Front, who was watching from the wings. Morse also named many of the photographers in the room, acknowledging that some of them had been shooting H2O concerts for 25 years. Morse was home, gushing about how much he enjoyed performing to a New York audience again.

With no new product to promote since 2015’s Use Your Voice album, H2O’s repertoire consisted of songs from the catalogue. Many in the audience were old-time fans, eager to reach for Morse’s microphone to join him in singing the choruses. Using simple song structures with minimal lead guitar, many songs hovered around the two minute mark, long enough for a bit of moshing, crowd surfing and stage diving without these activities becoming relentless. Morse said he wanted to retire “Thicker Than Water,” so H2O would perform it for the last time, and ironically it was among the songs that got the greatest response, along with a brief tribute to the band Warzone.

Throughout the set, H2O maintained a frenzied pace and wall of sound intensity. The set had a few traces of pop punk, especially when Morse and Pistachio sang in unison, but otherwise the band remained true to its hardcore bite. To convince the public that this is not a revival band, however, H2O will need to compose and perform new songs at its next concert.