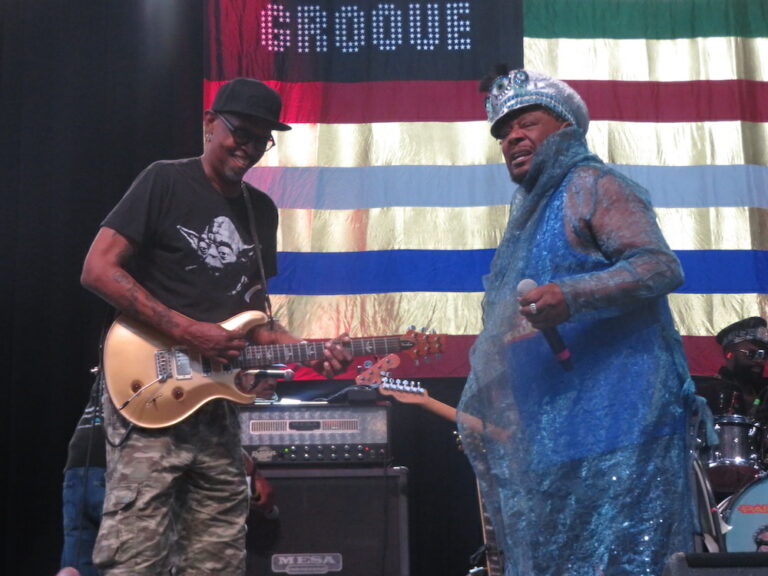 George Clinton announced in 2018 that his Parliament-Funkadelic would launch a farewell tour. Since then, the group has performed in New York City three times, the most recent being at SummerStage Central Park on June 15 as part of the Blue Note Jazz Festival. The Central Park concert was the first stop on Clinton’s 2022 One Nation Under A Groove tour, a package that includes which included brief supporting performances by Blue Eye Extinction, the Motet (featuring former members of Turkuaz), Dopapod, Pimps of Joytime, and DJ Funk Flex. Clinton is 81 years old and no one knows how many more times he will perform before he finally retires. After all, as stated in the lyrics to “Give Up the Funk (Tear the Roof Off the Sucker)” in 1976, “Ow, we need the funk, we gotta have that funk.”

Starting in music in mid-1950s New Jersey with a doo-wop group, George Clinton saw his first taste of national success when the Parliaments hit in 1967 with “(I Wanna) Testify.” By the 1970s, he led two groups, Parliament and Funkadelic, which consisted of essentially the same musicians, and capitalized on bringing rocking lead guitar leads into urban dance grooves. Parliament-Funkadelic was at its peak of freakdom in the mid-1970s.

Standing alone, “Give Up the Funk” was one of a rapid series of dance floor funk tunes, but in the context of the album Mothership Connection, it was the climax of a story line in which aliens from a planet that is short on funk offer to buy Earth’s funk but fail and so in desperation threaten to tear the roof off any place where humans were getting down. The tour for that album included a mothership landing on arena and stadium stages, and the musicians jamming endless solos in wardrobe ranging from zoot suits to diapers. Clinton scrapped the original mothership in the early 1980s; a replica is on display at the Smithsonian’s National Museum of African American History and Culture in Washington, D.C..

Clinton’s performance at SummerStage Central Park recreated the ageless spirit of Parliament-Funkadelic that was born in the psychedelic sixties. Countless musicians, vocalists, and animators drifted on and off the stage for a non-stop jam that flowed in and out of “Flashlight,” “Atomic Dog.” “One Nation Under A Groove,” and numerous other P-Funk staples spaced out by extended instrumental breaks. The musicians reportedly consisted of some old-time funketeers, including keyboardist Danny Bedrosian, saxophonists Greg Thomas and Greg Boyer, and guitarist Michael Hampton, who was known as Kidd Funkadelic when he joined the band at 17 in 1975. Clinton’s granddaughter, vocalist Tonysha Nelson, and grandson, guitarist Traf Lewis, represented the youngest generation of funketeers.

The musicians followed no prepared setlist; instead they followed prompts by Clinton, who spent much of the show seated on a chair. Clinton periodically stood to sing snippets of songs or animate the audience participation. Acting as if Dr. Funkenstein was the ringleader at a circus, Clinton was the master of ceremonies while the cast did the heavy lifting. The result seemed like organized chaos that was freewheeling yet synchronous. The audience responded by fixing its eyes on the stage and dancing to the tight and fluid grooves for two straight hours.

Clinton is a man with a wild past. That he is still alive and celebrating a healthy six-decade musical career is perhaps a minor miracle and a major blessing. The concert at SummerStage Central Park was both a powerful reminder of Clinton’s unique artistic genius and a tribute to his legacy.